Sorry, late night sleepiness is getting the best of me.  Enjoy the BINGO cards and watch with us.  I will livetweet the events and be sure to let you all know if we hit the BINGO this year.  Honestly, I'm skeptical, because we're going a bit crazier with certain guesses.  But that's part of the fun! 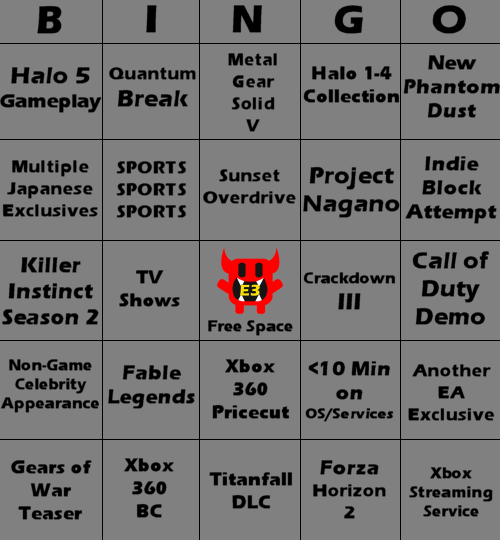 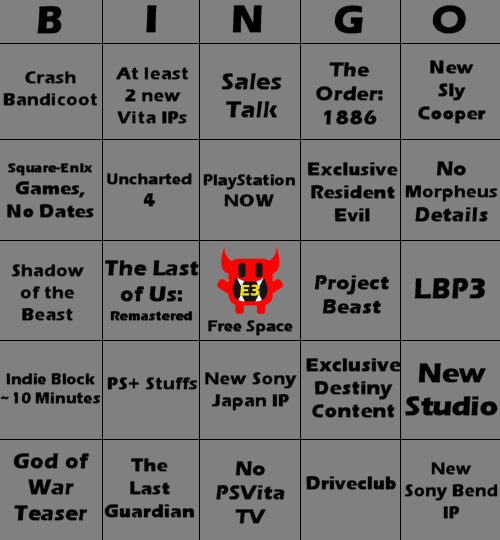 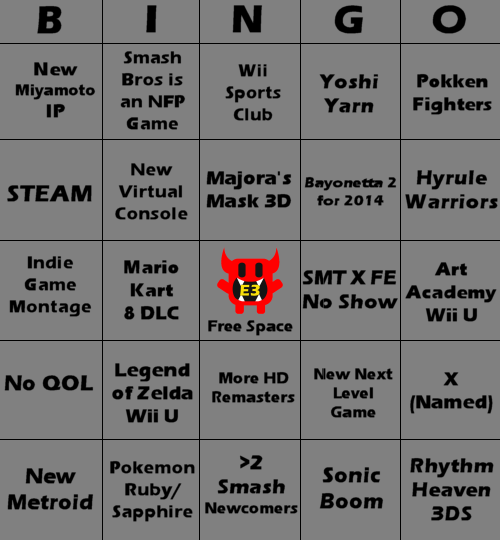 Enjoy and keep and eye out for our impressions videos afterward!

Posted by ThirdRateMinion at 2:19 AM No comments:

Email ThisBlogThis!Share to TwitterShare to FacebookShare to Pinterest
Labels: E3 2014

Hello, everyone.  Alex here to let you know how things are going here for us.  First off, thank you to everyone who watched and read our content during PAX East.  I did not think we could do it, but we did get even more content and fun out of PAX East than even last year.  On that note, though, we have to move onto our next big series of videos: E3 2014.


Microsoft is playing to win this E3, especially now that it has ultimately undone all the wrongdoing that it had faced last E3.  People despised Microsoft's DRM strategies and seemingly anti-consumer elements, and that helped Sony greatly even after the Xbox One's DRM was corrected.  Now, the head of Xbox has changed, the Xbox One now matches price-wise with PS4, and the policies are now just about equal to Sony's, even with indie projects.

As the playing field levels between the two, how does Microsoft respond?  We think Halo will play a significant role, and exclusive deals with bigger third party developers will pepper the conference along with attempts to appeal to the more gamer crowd.  The issue is, a lot of the surprises have been leaked by a leaker known as ntkrnl.  This leak unveiled plenty of large projects, and we suspect many of those will appear at this E3.  Only one way to find out!

The Theme: Game On
BIG Guesses: New Phantom Dust (Alex) / Gears of War Collection (Tony)
-Tony originally expected an announcement for Xbox 360 BC on Xbox One, but I asked him to chose a game not a feature.

Sony is in the best position this E3.  The PlayStation 4 is sweeping away the competition, consistently outselling the other two systems each month since release.  On the flipside, the Vita is on death's door outside of Japan, and that has to create some level of concern.  Even so, Sony's position is prime to keep accelerating in mindshare, but it just cannot remain complacent.  With Microsoft changing its policies and Nintendo pulling out some big guns and new concepts this year, Sony should not let itself shrug and wait for 2015 releases to roll around.

We suspect Sony will be unveiling plenty of new projects this E3, but many will not release this year.  We already know that at least one of the New IPs we though would show is not, but there is still plenty of room for new projects to be released.  Leaks of major projects such as Project Beast likely will dampen the hype at its announcement, but there must be more to show.  This is Sony's E3 to lose.

Nintendo's Year of Luigi was not one their accountants want to remember too much.  Last E3, Nintendo tried a Nintendo Direct but failed to realize people actually watch en masse during their press conferences, and on top of that, many of their games were already expected and not enough to woo certain skeptics of the Wii U.  This year, the company is working to improve its presentation with a new Digital Event, a Smash Brothers Invitational, and a stream running throughout E3 straight to the fans.  Also, the mysterious NFP platform is said to be present, and it better impress, if Iwata wants to ensure his job is not on the line later this month.

We suspect Super Smash Brothers for 3DS and Wii U will be the biggest focus, at least from the initial onset of the show.  Then, Nintendo will use the NFP platform to spur interest from fans and non-fans alike; whether it impresses like Skylanders or Disney Infinity will be discussed after, of course.  3DS games will not be as massive in scale as last year, but a Pokemon remake and new games will likely fill the gaps where Smash Brothers is not.  We suspect at least 1 or 2 new IPs will be shown, and we might very well get a good solid 2015 major release planned for the Wii U.  The skeptic in me, however, sees many of our latter guesses as unlikely.  Oh, and QOL will not show until later in the year, for sure.

There is too much to say other than a lot of companies are clustering releases in October or fleeing to 2015.  You will need to listen to our rambling for this one, folks!  Or you could just read the list below I suppose.


And with that, we wait anxiously for E3 next week.  Keep an eye out for posts here or via our Twitter or Facebook accounts linked on this site.  We will have BINGO cards at the ready, and impressions videos will come up shortly after the big days are done.  Microsoft, EA, Ubisoft, and Sony are on Monday, and Nintendo alone comes to play on Tuesday.  Follow our twitter account for livetweets of the events, provided our Internet does not die out suddenly! Hype up everyone!
Posted by ThirdRateMinion at 5:40 PM No comments: