Okay, so we are terribly late.  So I'm not going to say much else except we recorded these impressions just before Microsoft rescinded the Xbox One DRM.  We might do something about that, but most of the commentary is still relevant either way.

Also, we got BINGO on Sony once more.  Hopefully next year we'll get all three.

Posted by ThirdRateMinion at 7:08 PM No comments: Links to this post

Email ThisBlogThis!Share to TwitterShare to FacebookShare to Pinterest
Labels: E3 2013

Sorry to wait to the last minute, but here are our BINGO Cards.  We'll be livetweeting hopefully every conference this week, and we'll mark the cards based on what was at the conference specifically, what was at the show, and what may appear outside of the show until the end of the E3 period.

With no further delay, here are the big three.  And yes, we probably are not that outlandish.  There are some doosies in there, no doubt, though.  Will we get BINGO?  I sure hope so, for their sakes. 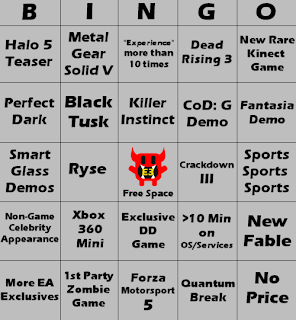 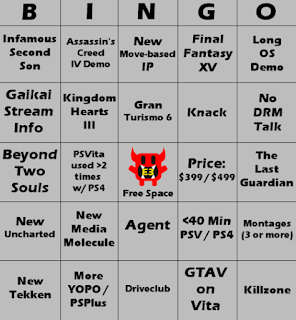 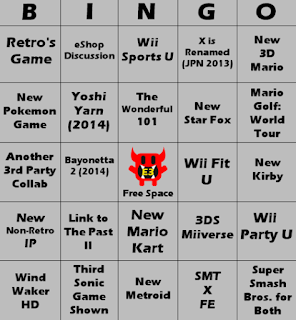 Posted by ThirdRateMinion at 10:56 PM No comments: Links to this post

Email ThisBlogThis!Share to TwitterShare to FacebookShare to Pinterest
Labels: E3 2013

Read more »
Posted by ThirdRateMinion at 7:15 PM No comments: Links to this post

E3 2013 is upon us!  After one of the most lackluster E3s in recent memory, we are hoping there are bombs dropped and megatons revealed all over our faces.  But of course, we do need to be a little realistic here.  I mean, there is doubtful to be any surprise buyouts or sudden releases, but still, if there was a year where the competition was fierce, this would be the one.

In our first step of E3 coverage, we bring to you our predictions for Microsoft, Sony, Nintendo, and all the third parties we can muster in four videos.  We will be posting BINGO cards for the big three shortly, but for now, it is time for those impressions to be let loose!  (Note: these predictions were made on the 4th of June before any major announcements and leaks were made)


Part I: Microsoft
Now is the time for Microsoft to show us that Xbox One actually plays games.

Part II: Sony
Sony wants us to want the PlayStation 4, but let us not forget the older siblings.

Part III: Nintendo
They won't be having a conference, but they have to give us the big games regardless!

Posted by ThirdRateMinion at 7:41 PM No comments: Links to this post