Over the years, Cartoon Network has become the home of dozens of cartoon franchises that span across a variety of audiences and styles. A number of people might have even wondered, “which character would win in an all-out brawl?” Well, thanks to Papaya Studio’s Cartoon Network Punch Time Explosion, people could figure it out for themselves, choosing CN characters to duke it out! However, when it was originally released on Nintendo 3DS, the content felt unfinished and the ideas unrealized; the uneven graphics, poor sound quality, and dodgy performance hurt it quite a bit. Now, a few months later, Papaya Studio has released a console version, titled Cartoon Network Punch Time Explosion XL. After playing the first release and finding it disappointing, I was concerned that the console version would end up the same way. Luckily, I was mistaken. Cartoon Network Punch Time Explosion XL is both larger and better than its 3DS counterpart by far. More characters, more levels, more modes, more action, and best of all, more polish! While it still has its flaws to keep it from being a punch time explosion for everyone, the XL version is a much better and more recommendable game.

VIDEO REVIEW
At its core, Punch Time Explosion XL is a fighting game, but not just any fighting game. It is, without a doubt, based directly on Nintendo’s Super Smash Bros Brawl, but instead of Nintendo franchises, it has Cartoon Network characters, including the Power Puff Girls, Ben Tennyson, and Flapjack. Besides the original eighteen playable characters, XL adds eight new fighters such as Johnny Bravo and the Scotsman which can be obtained by unlocking them via the in-game store. While the selection of characters is much better in XL, some cartoon franchises are neglected or not represented at all. There are plenty of CN hits such as Samurai Jack, Chowder, Foster’s Home for Imaginary Friends, and Ben 10. However, older franchises such as Ed, Edd, n Eddy and Courage the Cowardly Dog as well as more recent and popular shows such as Adventure Time are surprisingly absent while Ben 10: Alien Force gets a large push. The uneven distribution of characters is apparent in the game’s level count, as well. 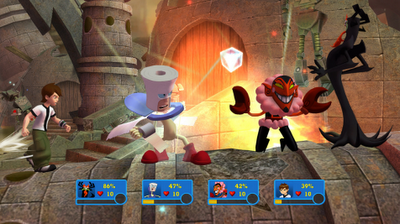 From children with transformation abilities to the darkest evils around, this game
sure has varied characters.
When comparing the 3DS stages to XL’s environments, the 3DS feels still and lacking while XL is exploding with more action. Both the returning stages as well as five new stages now offer a wide variety of activity, from breakaway floors to massive koi fish attacks and massive robot-induced destruction. When you introduce these stages to four-player battles, the game lives up to its name.

The goal of each fight is to knock your opponents off the screen with your character’s special attacks. Not only does each character have their own special moves, but they also have a unique Punch Time Explosion, a super powerful attack which can only be activated after collecting power cubes dropped by opponents. Thankfully, the Punch Time Explosions are not tediously long and jarring like those on the 3DS but instead appear quicker and are more integrated into the match. Besides your character’s move set, there are also weapons that can be picked up, including a teddy bear launcher and Assist Cubes which can summon another character to ‘assist’ the summoner. These Assist Attacks vary greatly from one another, from Gwen Tennyson’s psychic shields to Captain Stickybeard’s canon attack. A new element in XL is the Synergy Attack in which your character joins with the assist character to perform a special super move. They are very similar to the PTEs but are harder to come by and help add an extra level of chaos to the game. 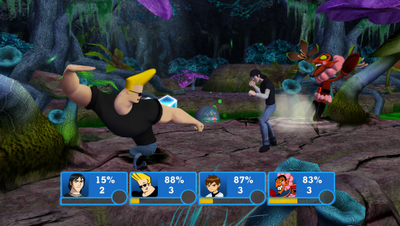 Does Johnny Bravo want to brawl or just dance? Could go either way!
The actual game performance has been tweaked for the better. Thanks to the extended development time, the hit detection feels more spot-on than in the original version, and the game moves smoother more often than in the 3DS game. Despite these tweaks, XL’s computer AI is still one-noted and frustrating on the harder settings. When playing a team match or free-for-all match with computers, I found they would only come after me instead of going after each other and very rarely changed their strategies. For this reason, playing the game by yourself does not feel that engaging, but once you add a friend or three, the game’s enjoyment is increased dramatically. Unfortunately, these friends will need to be with you; the game lacks an online multiplayer mode.

The game content is broken up into two modes: Story Mode and Battle Mode. The Story Mode brings all the Cartoon Network worlds together and tries its best to explain how they came together in the first place. While the narrator is watching Cartoon Network, chaos begins to spread across the various shows as the cartoons' villains begin to invade other worlds. Ben Tennyson quickly heads out to stop them and, with some help from Dexter, gathers all the heroes together in order to save their worlds. Level-wise, the Story Mode is more or less the same as in the 3DS edition. Players must run and jump through multiple Cartoon Network worlds, which tend to lead up to battle arenas against one of the game’s villains or large enemy hordes. Thanks to the extra development time, the platforming segments feel less floaty, and the game improves the tutorial elements of the game. To break up all the combat and platforming, some stages have the occasional mini-game, ranging from first-person shooter segments to mine cart rides. While a few have been fixed up from their 3DS counterparts, others feel out of place and uninteresting. One example is FPS sections, which feel especially difficult to aim. The level design starts great, but as I progressed, I found the worlds and layout designs to become less interesting. While playing the story mode by yourself might get boring, XL allows for co-op play up to four players, which makes the story mode far more enjoyable. In fact, we highly recommend cooperative play for the best experience. 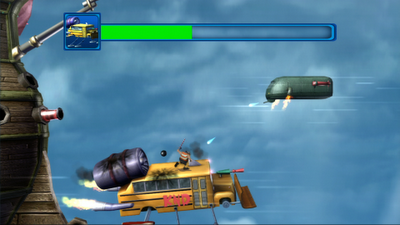 Man, getting to school is more dangerous than I thought!
The game’s other mode is Battle Mode, which has been given more options that were lacking in the handheld version. These include PTE Mode, where the winner collects the most energy orbs, Drone Mode, where the winner deals the most damage to the enemies on-stage, and Arcade Mode, in which you challenge character after character without any platforming or mini-game sections found in the Story Mode. While playing through the story and battle modes, you collect in-game points that can be used to purchase XL’s new characters and levels, alternate costumes for all characters, and video clips from the cartoons in HD quality. With plenty of nostalgia-soaked unlockables, the game does have a good sense of replayability, if you are interested in Cartoon Network’s lore.

Punch Time Explosion XL’s graphics and sound have been given a bit of an enhancement. The game’s textures, models, and backdrops all look more detailed in a higher resolution, and the musical tracks and sound effects are a lot crisper than before. The models are smoother and more animated, and bump-mapping and bloom -lighting improve the environments.

Despite all the fine-tuning and smoothing out XL has gone through, the game has an issue with inconsistent presentation. Transitions from cutscenes to gameplay and onward are rough at times, as the game tries to load the next area. Cutting to the main menu after a single match in Battle Mode seems off, and hearing the menu theme pop up after every level or match became annoying as I progressed. There were a few moments in which animations became jumpy, and sound effects were also inconsistent in volume. Also for voices, only the announcer spoke in full sentences, while the others gave small grunts or phrases instead of what they were actually saying. Hearing “I am Dexter, boy genius,” when he is clearly not introducing himself feels out of place. Not all voices are original and are sometimes poorly replaced, though the XL version has more original voices this time around. While the graphics and audio have benefited from the extra development time, the overall presentation of the game is still inconsistent and should have been smoothed out a little more before launch.

When compared to XL, Cartoon Network Punch Time Explosion for the 3DS feels like a beta. Cartoon Network Punch Time Explosion XL feels more like the complete version with more characters, levels, and modes. However, if you have played the 3DS version, you will find a nearly identical story mode and gameplay experience here. What really sets XL apart from the 3DS game is the overall improved quality it got from a longer development time. Better graphics, sound, and physics all make this game a more enjoyable experience than on the handheld. Also adding cartoon clips and costumes can extend replayability and bring more nostalgia to fans. Despite these improvements, there are still some glaring presentational inconsistencies that make this game feel unpolished compared to the greats. If you enjoy any of the cartoons represented in the game, you will more likely than not find this to be a pleasant gaming experience. However, if you are not a fan of the cartoons used in the game, this game is an average fighter based off Super Smash Bros. that can be played on any console for a budget price. Also, play it with someone or you will be missing out on the best of it.

CNPTEXL is a fun, action-packed multiplayer brawler with a decent selection of Cartoon Network characters, but its lack of certain popular franchises, inconsistent presentation, and meh single-player experiences limit the game to fans of the series and those willing to give it a try. Those with HD platforms looking for a Smash Brothers equivalent will find a decent one here.


Disclaimer: This game was provided to us to review by the company.
Posted by ThirdRateMinion at 7:16 PM