There are a myriad of games which have graced the App Store with the intention of being the next big pick-up-and-play game, following Angry Birds. One of those games, ZeptoLabs’s Cut the Rope, fit greatly into that genre with a cute monster and plenty of puzzle-driven candy deliveries. Now, a full year after the original game’s iOS release, Absolution Games and Chillingo have come to bring Cut the Rope onto the DSiWare service, but is it a sweet treat or a sour tart?

Cut the Rope is a deceptively basic puzzle game in which you receive a large box, inside of which lives a small green monster named Om Nom. Thankfully this monster lacks a taste for human; on the contrary, he has but one desire: CANDY! The main focus of the game is, therefore, to send circular candies to Om Nom’s gaping maw. This is easier said than done, however, as you have no direct control over the candy, only the objects that surround it inside the box.

Being called Cut the Rope, it is obvious what the most influential aspect of the game is. In order to cause the candies to head toward the hungry monster, you need to cut ropes in such a way so as to send the candy in the right direction. Of course, that is not the only action players get, nor is every rope treated the same way. Over the course of the game, you get to encounter hooks which grab onto falling candy, while at the same time there are ropes that have to be cut quickly, lest equally hungry spiders steal the candy for themselves. Players also have the ability to pop candy-lifting bubbles or push balloons to blow air in a given direction. By the time the interactivity begins to feel less interesting, a new element is introduced to keep things fresh and curious. 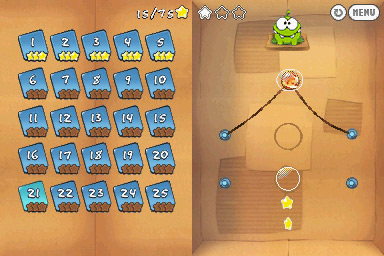 It's cute, it's in a box, and it's hungry!
In particular, major new elements are introduced with the start of each of the game’s five boxes, each representing twenty five levels a piece and totaling 125 for the full game. Starting from the basic Cardboard Box, new major elements are brought in with each box, whether they are moving rope-centers in the Foil Box or gravity-changing buttons in the Cosmic Box. In order to unlock the latter four boxes, however, you need to collect as many stars from the levels as possible. Each level contains three stars that must collide with the candy to be collected, but in most cases, they put the candy in much greater danger rather than simply going to Om Nom. The major challenge in Cut the Rope, therefore, rests in getting as many stars as possible in order to unlock more worlds and ultimately complete the game. Getting all three stars and clearing a level in one go may take some time, but when you do, you cannot help but feel proud for you and your candy-loving friend.

The aesthetics of Cut the Rope are altogether charming, and Om Nom has a lot to do with that. His animations are cute, and his saddened whimpers at each failure only bring you to work that much harder to get him that candy. The music fits the playful nature of the game, but the soundtrack is so short that it becomes tiresome by the third or fourth box. 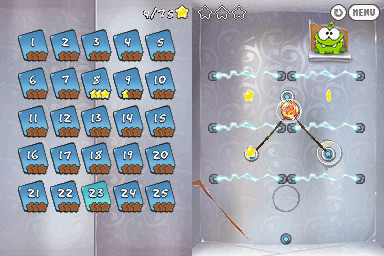 The game features a number of boxes each with their own special elements.
Now, all of the game sounds delightful, and it very much should. However, the game does have a list of problems, mostly stemming from the fact that this version, unlike the one on Android and the App Store, suffers from its platform. The DSi resolution is much smaller than that of the other platforms, and as a result, the graphics look muddled. To make matters worse, certain cuts and movements are not read as accurately as they could, causing occasionally frustrating moments in which the game wants to do something else and ends up with broken candy. The music and sound effects are compressed heavily, and the framerate occasionally drags with a number of rope-heavy levels, not as much as in the eShop trailer, mind, but still enough to be a damper on the experience. 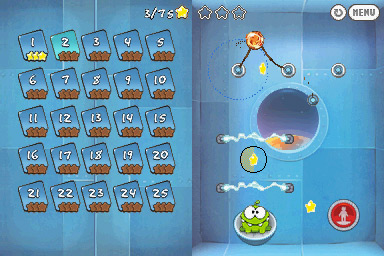 Most will "flip" over the game, but it can be better elsewhere.
The other major concern with being a DSiWare release is that this version will most likely remain unchanged. Buying this five-dollar version of Cut the Rope would be the same as if you bought the other versions as of late 2010. Since then, those versions have gotten four more boxes, almost double the content this game provides. The chances of any update to this edition of the game is close to zero, although having the extra four worlds put in another DSiWare or 3DS download game could happen. Otherwise, Cut the Rope on DSiWare is literally half a game compared to other platforms. Not to mention that it uses no unique DSi elements such as the camera or dual screen to its advantage.

Those major issues aside, the game is a fitting addition to the DSiWare library and should be a fun experience, one way or another. It just does not have the same level of content as its other editions, which can certainly put a damper on the whole purchase.

Cut the Rope is a fun and unique puzzle experience, with plenty of ideas to keep the game from wearing thin, a cute character design, and an altogether welcome environment for gamers of all ages. The DSiWare version does suffer from the venue, though. The lower resolution hurts the contents and sometimes yields problems in-game, and the size requirements reduce the sound quality. Considering that this version will most likely not add the other worlds developed over time and does not make any attempt to differentiate itself on the DSi compared to the other versions, this game can only be seen as a basic port of an older version of Cut the Rope.

Those who have other mobile platforms might be better off getting Cut the Rope there, with more levels, better presentation, and for a lower price. However, if you would prefer gaming on your DSi or cannot get it elsewhere, I recommend you give Om Nom more than just a single glance.

CONS:
- Just over half the levels of the other game editions
- Lower resolution hurts graphics and impacts gameplay
- No additional features to make it stand out compared to cheaper versions


*Downloadable games are rated on a scale of No, Maybe, and Yes. Maybe denotes a game which is welcome for particular gamers but has a number of flaws or has elements which keeps it from being wholly recommendable to all gamers.

Posted by ThirdRateMinion at 5:44 PM