The developer of Sled Shred was a small developer called Just for Fun Studios, and finding information on the company proved fairly difficult, as the company did not have a website or any real online presence outside of a few profiles on Linkedin.  Though these profiles, we can link Just for Fun to another company, the London, Ontario based developer Beanbag Studios.

Beanbag Studios was founded in the early 1990's, specifically making the coin-operated Countertop Champion series of arcade games as well as basic PC products.  For a time, the company worked with GT Interactive on such titles as Fuzzy Buddies, Nail Styler, and Lawyer Hunt, among others.  Perhaps the first noteable release by Beanbag was a title also developed by Utopia Technologies, 1998's Montezuma's Return.  On the console gaming front, the company's first release was Disney Dinosaur on the PlayStation, but the company's most notable title at the time was the Xbox launch title Shrek, published by TDK Mediactive.  In a short while, though, the company's development assets were sold to Electronic Arts, with the last release being Secret Agent Barbie - Royal Jewels Mission in 2002.

Beanbag Studios reformed in 2007, hiring a multitude of developers to focus on PC and Nintendo DS titles.  The output of this company was casual-related, including Travel Games for Dummies, Sudoku for Dummies, and Brain Training for Dummies.  There has been no developed titles by Beanbag since 2009.

Just for Fun Studios was founded at the end of the development of most of the Beanbag-developed games, and it appears to have been founded early 2009.  The only major release the company developed was Sled Shred; based on the time the employees worked there, the game was completed within nine months.

The game's publisher, SouthPeak Interactive, was founded in 1996 as a subsidiary of SAS Institute, an analytics software corporation.  One of the company's first releases was Temujin for PC, a detective adventure title.  The first console game from SouthPeak was the 1999 release The Dukes of Hazard: Racing for Home on PlayStation, developed by Sinister Games.  Other major releases over time include State of Emergency 2 by DC Studios in 2006 and the Two Worlds franchise (starting in 2007).  The company expanded in 2008 when it acquired Gamecock Media Group, and through that venue, SouthPeak published Mushroom Men: The Spore Wars (by Red Fly Studio), Velvet Assassin (by Replay Studios) and Section 8 by TimeGate Studios in 2009.

The World Snow Games are quickly approaching and once again the Jamaican Bobsled team is preparing to take the world by storm. But finding a team that has the right stuff isnt easy. Coach Mon has embarked on a mission to find those rare individuals that have what it takes. Are you fit enough? Are you focused enough? Are you brave enough to jump on a bobsled and rocket down that tube of ice at break neck speeds? In Sled Shred featuring the Jamaican Bobsled Team, prove yourself to the legendary Jamaican bobsledders and learn the ropes of downhill sledding in order to join the coolest team in the world!

Sled Shred is a downhill racing title in which players ride a multitude of objects down slopes to the exit against three other racers.  Initially the races are simple and use inner-tubes, but over time, additional elements are unlocked, including snowballs, ramps, and flag gates which can help impede or improve ones speed through the various locales.  Furthermore, there are multiple methods to run down the hill, including via steel runner and toboggan.  After a multitude of traditional slopes are completed, the game unlocks a Bobsled method of gameplay, in which players rush through Bobsled courses instead of traditional slopes with power-ups.

The game touts the usage of the the Wii Balance Board as a control option, but otherwise, the Wii Remote is the default control scheme.  The game unlocks characters as you play, and multiplayer is available to play though unlocked courses and options after playing through the single-player campaign.

The Jamaican Bobsled Team take part in cutscenes between each Chapter, and they are also unlockable racers over the course of the single-player campaign.  The music of the game is a basic ska style of music, and the locales attempt to take more fantastical, warm settings and add elements of snowed-in locations to fit in the Sledding concept of the game.

Sled Shred appears to be Just for Fun's only title released.  There is no website to depict any future release from the company, and the Linkedin profiles show everyone involved moving to different locations afterward.  It is likely the company closed after the game's completion, although the reason why is pure speculation.

Developers of Just for Fun Studios have since split into various industries, and the only gaming link today from the company is to Big Viking Games, specifically the Facebook game Fish World.

SouthPeak Interactive has had an uneasy future, as well.  The company removed itself from NASDAQ and entered litigation against Section 8 developer TimeGate Studios.  Now with TimeGate Studios in bankruptcy proceedings, SouthPeak is attempting to obtain the Section 8 IP.  The last major title released by SouthPeak Interactive appears to be Two Worlds II, released in 2011, although there have been other games released in 2011 as well.  The company website is unavailable at this time, so judging future releases appears to be unlikely, but the company's attempt to gain Section 8's IP shows that at least some life in the company remains.

The choice for this game was pretty random, and we decided to take a run through the game, believing that it would be over in an hour's time.  So, we rush right into the Single Player mode and play through Chapters 1 through 5, ending at Chapter 6, the first of two Bobsled-focused chapters in the game.

Like most motion-controlled racing games from budget developers and publishers, Sled Shred was not the most responsive racing experience to have.  Movement was occasionally unresponsive, which led to less-than-optimal positioning, and this became even more problematic when the harder stages and Bobsled areas were unlocked.  The presentation was basic to say the least, and the music was fairly generic for ska music.

The stage variety was something that we did not praise enough in the video; the number of locales by the end of the playthrough had grown into something acceptable for a racing game.  The different unique locations would definitely be welcome for people to race through with others, but because the stages needed to be replayed many times to unlock new ones, I imagine the one unlocking the stages would be sick of the earlier stages by the end of it.  Seriously, we played through Cowboy Calamity at least four times, and it was not great to explore it that many times in one sitting.

Overall, the game was what was expected of a budget Wii racing game.  Not high-tier under any circumstance, but considering the game was apparently developed in less than a year, it could have been much worse.  There could have been better pacing in the stages in the Single Player mode, and the controls needed some more tightening.  Also, the twist to Bobsled racing was not what I would call fair, and it made me quit the game with no looking back.  Perhaps easier AI during those stages would have been better at first and ramping up later.  We had our fun, and for a rented lower-tier Wii game, that is the most we could have hoped for. 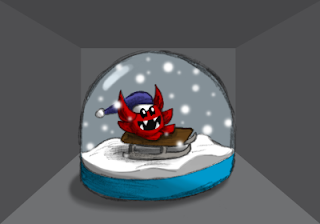