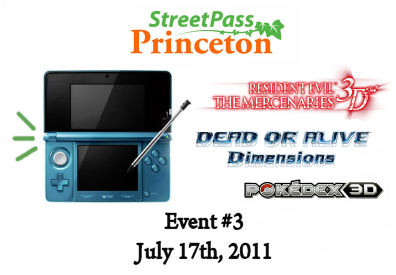 StreetPass Princeton is a group of gamers who all own 3DSs and want to not only come together to take part in StreetPassing but also to talk and enjoy gaming experiences between people in the local area.

Over the last two months, there were a great set of events from StreetPass Princeton. In May, SPP went to Panera Bread in Princeton to play with QR Codes and Super Street Fighter IV 3D Edition, and in June, SPP was at the Quakerbridge Mall GameStop to hold a Dead or Alive: Dimensions tournament. This month, StreetPass Princeton took part in a nationwide StreetPass Network event, and while there were some setbacks, the event made it through.

Group founder Rob Oehlberg met us with a few fellow members at Marquard Park, a small park complete with playground sets, softball field, and picnic areas. A canopy stood by the group's selected picnic table, and underneath it stood a table complete with the event's catering. At the picnic table, a selection of QR codes for Pokedex 3D were laid out, which was useful for getting a myriad of special stickers, in-game.

The setup was a miracle, Rob would tell us. The month of July came as a rush for the group, particularly with those who set up the whole event. Rob and his twin brother Nick had moved in the past month, the latter of which was in North Jersey and could not attend. Furthermore, a number of people had called out from the event in the last second, including the member in charge of the planned Super Street Fighter IV 3D Edition Tournament; the tournament was cancelled as a result. To make matters worse, the crew found that Marquard Park forbade barbeque on the grounds, with mere days before the event. Thankfully, they were able to improvise a nice spread of peanut butter and jelly, turkey and cheese, ham and cheese, and combination meat sandwiches. Cookies, chips, and a plethora of soda choices filled the gaps. Rob said determination and improvisation helped StreetPass Princeton's third event from the brink of cancellation. 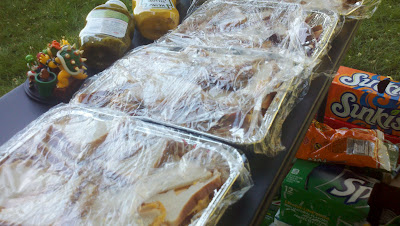 Mario and the gang stood to defend the sammiches from the fly invasion.
The headlined event at the park was Capcom's "Stop the Swarm" campaign, a national StreetPass Network event in which players attempted to get an S or SS ranking on missions within Resident Evil: The Mercenaries 3D. Throughout the event, people went through missions to get those fabled scores, and while a number did go to the easier training missions, others pushed through more difficult missions filled with large zombies and other big baddies. Those who succeeded placed their name on a list to be sent by StreetPass Princeton to Capcom for public posting. 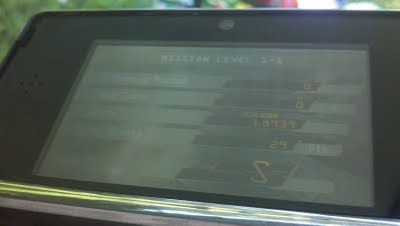 Proof that I got me an S rank and did it the easy way.
A Capcom-based Cosplay Contest was held at the event, and the winner came out as Detective Gumshoe from the Phoenix Wright series. For the prize, she walked away with a Platinum Club Nintendo Mario Statue from 2010. 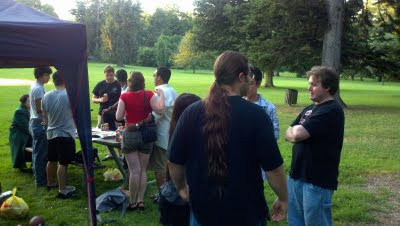 A portion of the people hanging out and talking games. Check out Gumshoe to the left.
While these events took place, attendees discussed gaming in general, from the eShop's first month of release to other console releases in the coming months. Pokedex 3D was used by some to pass around pokemon and get much needed QR codes, while others picked on each other with Dead or Alive: Dimensions. Others took part in singular experiences, such as Legend of Zelda: Link's Awakening DX or more Resident Evil: The Mercenaries 3D. Even disregarding the handheld, a number of small conversations erupted between people at the table and around the canopy as the afternoon drifted toward the evening.

Yes, some things did not go according to plan, but in the end, this event was a simpler, more relaxed meeting compared to the tournament-driven June event. No doubt, this event helped get members to know more about each other and bring StreetPass Princeton closer as a group. 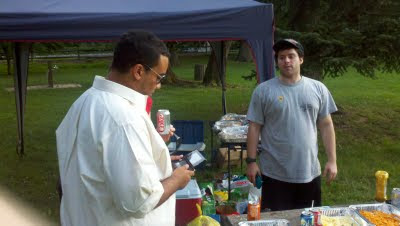 Soda, conversations, and gaming. A great trio.
Now, the big question arises: What about August? Well, there are few games coming out between now and the next date, Rob says. Instead, he has plans for the first Retro Game event, that is, DS tournaments, including Mario Kart DS and Tetris DS. More details will follow on the StreetPass Princeton Facebook Page. Talk also emerged for potential online meetups and a forum; while StreetPass cannot be used, at least these meetings could allow more informal meeting and enjoyment in gaming with friends across the 'net. See you next month!
Posted by ThirdRateMinion at 10:41 PM