Gaijin Games' sub-label Robotube Games was at PAX East's Indie Megabooth this year, and the newest title being shown is a callback to the arcade game worlds of yesteryear, Woah Dave!  We were able to get some hands-on the single player mode, and we also got to watch a Two-player match as well, and from what I have witnessed, Woah Dave is going to be just like arcade games of old: flashy, quick-to-learn, terribly difficult and swear-inducing, and at the same time very addictive.  Check out our full impressions after the jump.


Woah Dave is a fast-paced arcade game with a very simple premise.  Players control a cartoony pixel character Dave whose goal in life is to kill aliens, create explosions, and collect as many coins as he possibly can.  Initially, eggs fall from the sky onto the platforms below, and after a short while, these eggs hatch into alien beings.  In order to get the much-desired coinage, Dave has to kill said aliens or their eggs before their hatch, but touching hatched aliens leads to an instant death.  So, Dave is tasked with using the aliens' eggs themselves to kill other aliens, before they hatch and kill him in the process.  Once an alien is eradicated, its remains in the form of coins appear, and riches are your reward!

Perhaps I should have said the game has a deceptively simple premise.  Over time, undefeated aliens will walk toward lava pits below, and upon falling into them, they will transform into a more aggressive form of alien life, and this process can be done a number of times, making their pursuit toward our pixel protagonist more intense with each phase.  This makes killing the aliens quickly paramount to survival.  Furthermore, aliens would not be aliens without laser-spouting UFOs!  Dave's short life sure has it cut out for him! 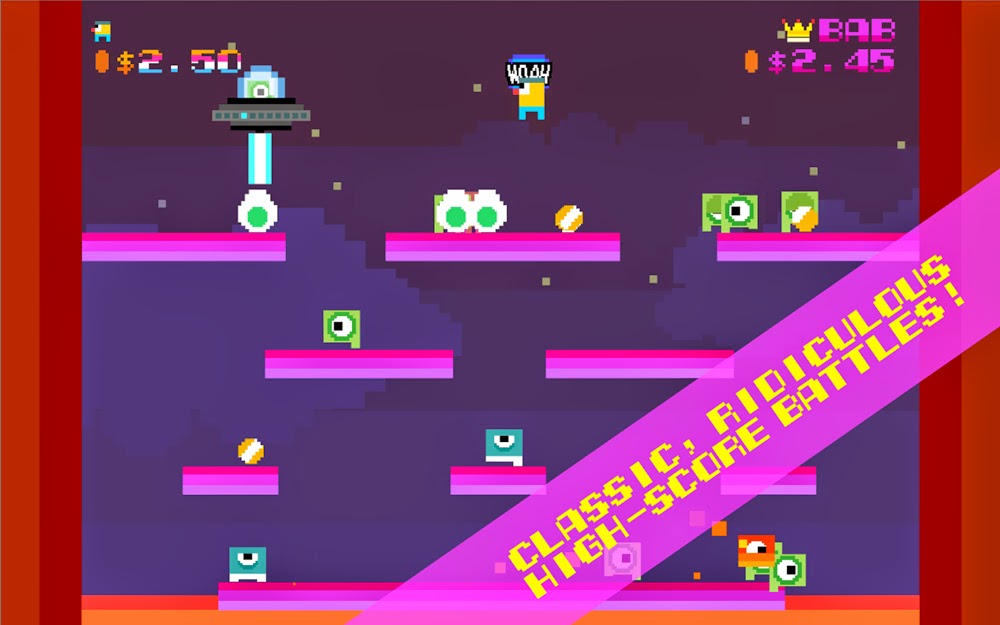 Ridiculous is right! You will say Woah!

Thankfully Dave is not a one-tactic hero.  Along with eggs, bombs fall from the sky as well.  These bombs can explode and destroy everything in its blast, eggs and full-grown aliens alike; just do not get caught in the blast yourself!  More importantly, though, is the wonderful power-up, the Woah Block!  A Woah Block appears suspiciously like a block used by a familiar plumber, except it is tossed and bounces as it destroys all in its path, including Dave!  Considering all of these elements are together in play on a single screen, Woah Dave gets crazy fast.  Oh, and I forgot to mention that there is a hard mode, too.

I am not good at fast, especially with new games with one-hit kills, and when it gets crazy fast, I just go crazy stupid sometimes.  In my moment of playtime, I found movement to be quick and responsive, almost too responsive for me to control.  Dave would jump in a swift leap, faster than most platformers I were accustomed to, and I found myself colliding with aliens more often than I would like to admit.  I will not fault the game for my poor arcade game skills, although I will have to say that like all arcade games, a learning curve is present, even for something as seemingly simple as Woah Dave! 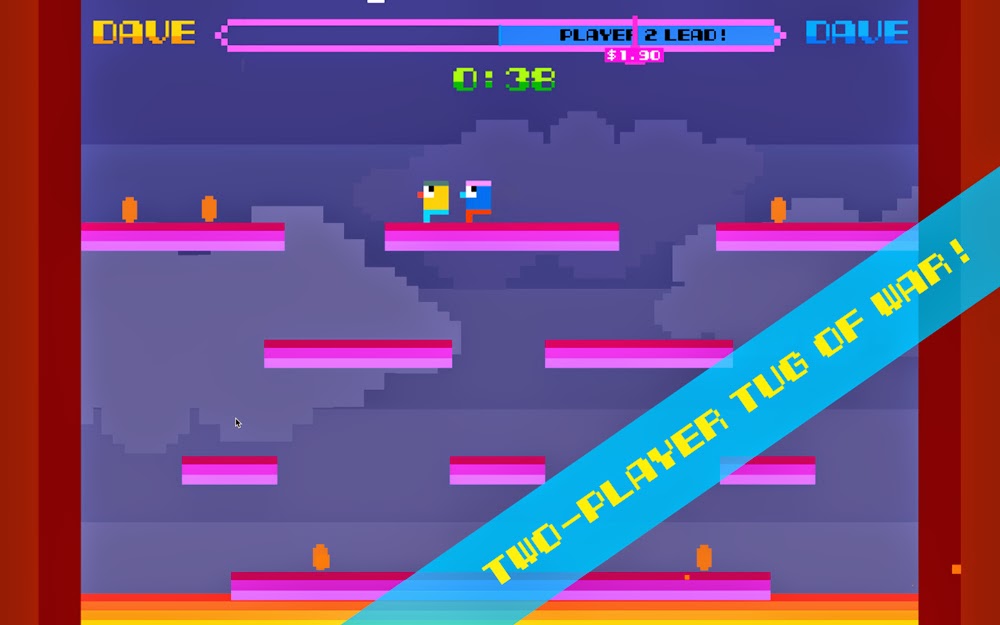 In this war, whoever wins, it's Dave.

What I really enjoyed was watching the 2-player match that went on a short time afterward.  In two-player matches, two Daves fight to collect as many coins as possible, and whoever has the most coins by the end of the timelimit wins.  Death ultimately causes the dying Dave to lose coins, so throwing eggs about to hatch or bombs or even the Woah Block is about more than just killing aliens.  The player I watched was no match against creator Jason Cirillo, but it was a fun romp to watch regardless.  I suspect this mode will be the most coveted in my house.  Be prepared to lose, Tony!

Graphically, Woah Dave does it simple and does it well.  While it does not match some sprite details you might get on even some earlier arcade games of the olden times, it still resembles a certain genre of retro games on the ColecoVision and Atari ages.  The music and sound effects match this aesthetic, down to the lo-bit voice from Dave himself.  It all matches together in a pixelly picture that you will loath and love at the same time.

Woah Dave! is currently set for iOS, Android, Steam, and Ouya, but we will hear more about platforms and release dates in the coming weeks!  For more, check out the official site.
Posted by ThirdRateMinion at 6:22 PM