This past NYCC, Microsoft had a number of games showcased around its booth, including Kinect titles The Gunstringer and Just Dance 3 and upcoming titles Mass Effect 3 and Halo: Combat Evolved Anniversary. Inside the main circle, however, there were three XBLA titles available to play, including newly-announced Fusion: Genesis (we have footage of that game to appear in our Miscellaneous Montage), Robot Entertainment's Orcs Must Die, and last but not least, RedLynx's Trials Evolution.

Trials Evolution is the sequel to the Summer of Arcade hit Trials HD, and from the time I had to try out the game, it has the same insanity of the original but with a bit more. Graphically, Trials Evolution is just as good as the original, but instead of the darker and enclosed locales, Evolution breaks free into the fresh and dangerous outdoors. The game ran at a super-smooth framerate, and the camera kept itself situated in such a way so as to accentuate each ramp's depths and every sharp turn within the newest escapade. 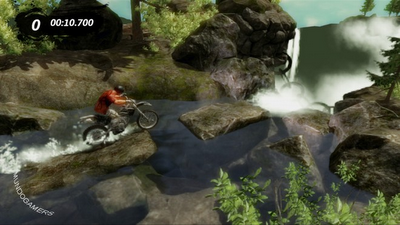 New locations, new obstacles, new tricks.
Controls are very smooth and should be very close to that of the original XBLA game, which made running through the obstacle course a constantly active experience. Players control not only the bike's speed but also the position of the rider, shifting forward or back on the crazy motorbike. This shifting of weight is what will determine whether the rider makes the jump or gets acquainted with the ground at many dozens of miles per hour. Of course, making those complicated jumps is altogether satisfying! The pull of Trials HD remains as potent as ever this time around. 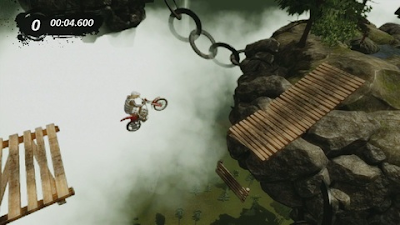 I somehow doubt he is going to make it.
I did not get a lot of time to look further than a few levels, but from what I played, it was a delight and will certainly live up to Trials HD's style in some way. To see what I experienced, view the video below.

Trials Evolution has no clear release date, but we should expect it soon for XBLA.
Posted by ThirdRateMinion at 7:20 PM