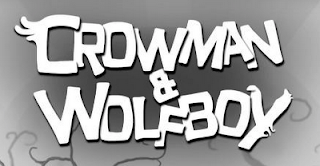 Amid the smaller developers showing off their wares at PAX East, we got to spot an upcoming developer showing off their unique take on the running platformer on iPad.  Wither Studios, based on Pittsburgh, was there to demonstrate Crowman & Wolfboy, and we took some time with Doyle of the team to discuss the game and what to expect when it finally releases.  Check out our preview after the jump.


Crowman & Wolfboy is an automatic running platformer, otherwise called runners.  However, the similarities begin to dissolve when you spot the characters themselves.  The game stars two shadow beings, Crowman and Wolfboy, who have grown detached from their dark world.  The other monsters living in the dark world relish in their evil ways, but the duo decide to break away from their world to search for Humanity, hoping to find a happier and more colorful place to live.  While their journey seems noble enough, the shadows mass together to bring the duo back to their monochromatic world, prompting the two to run for their lives and for happiness.

Players control both Crowman and Wolfboy at the same time, tilting the iPad or other device in order to move the characters left and right on the screen, all while the dark shadows continually run forward.  In order to venture through the worlds, players will need to use a combination of touch screen motions and tilting mechanics to overpass obstacles.  For instance, the team demonstrated the flight mechanic; touching the screen would cause Crowman to lift up, grabbing Wolfboy and flying through the air to avoid obstacles such as clusters of bramble and deep chasms.  Doyle provided further insight on other abilities, including a dig function - touching a damaged wall next to the duo will prompt Wolfboy to make use of his claws and dig a tunnel onward toward safety.  This is not just simply running and jumping!

On second thought, calling this game a runner might be a bit unfair, when there are plenty of other things the duo do in the game.  What was described earlier was but one of three level types: platforming, flying, and falling levels.  In the platforming levels described above, there are light orbs to collect and trapped creatures to free, adding to the intensity of certain obstacles.  In the flight levels, players control the characters in a ship by tilting the vertically-set device left and right, and there are plenty of power-ups to collect for added protection and speed.  Finally, there are falling levels in which Crowman and Wolfboy are both falling forward from the screen.  Players must then tilt the device in all directions to prevent hitting anything on the way down.  It seems the duo are constantly on the move; hopefully the trip will be worth it!

The game's art style looks painterly with a touch of that dark and foreboding flair reflective of the protagonists' world.  The worlds begin in a monotone, bleak forest but begin to add color as the game progresses.  Soon, the duo end up running through vast deserts, frozen landscapes and dark caverns.  In all, the game is expected to bring the characters through over fifteen environments with over thirty levels of adventure.  What will happen when they reach their destination?  Find out when it comes out!

Crowman & Wolfboy is slated for release sometime later this year for iDevices of all sort.  Check out their site here.
Posted by ThirdRateMinion at 7:08 PM