The third world takes a turn from the hot to the frigid.  We avoid a few specific levels as we venture onward, but at at least one particular level, lives start to vanish amid sliding ice blocks and a myriad of pits.  It seems that ice levels are always the bane of platformers' existence, and New Super Mario Bros. Wii looks to keep true to the difficulty trope in platformers.  How badly do we do? Check it out!

The 2010 recordings were made on the same day we recorded a multitude of other episodes, which have been posted online already (well, save one, but I won’t explain that too much).  At the end of the night we recorded three worlds of New Super Mario Brothers Wii, and I think we did a great job, considering.

In the third part, the ability to become bubbled rapidly became necessary for survival, especially in the final levels leading up to the boss.  Many deaths were to be had this time around, and focus became less and less of a commodity as the night dragged on.  Some levels became exceedingly difficult considering how poor our reflexes had gotten, and poor Luigi would die quite a few times, for sure!  The end of the episode got a bit

This completes the 2010 episodes of our New Super Mario Bros. Wii playthroough.  Following this are two episodes in 2011 and three final episodes in 2012.  Let's get going! 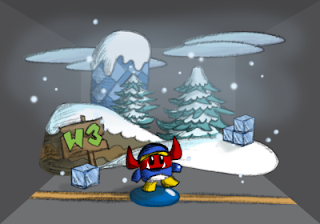 3RM Says: Brr! Thank goodness I'm wearing this ducksuit to keep me warm.
Don't think ducks were blue before, though...
Posted by ThirdRateMinion at 9:13 PM