The second world comes to us without much warning, and we start to find the game's difficulty arise with four players playing together in some semi-cooperative fashion.  We play through all but two stages of the world in our efforts to complete it quickly, despite Tony's requests to play them all.  Regardless, we encounter troubles, and as a result, you will encounter good times to watch.

The 2010 recordings were made on the same day we recorded a multitude of other episodes, which have been posted online already (well, save one, but I won’t explain that too much).  At the end of the night we recorded three worlds of New Super Mario Brothers Wii, and I think we did a great job, considering.

It became readily obvious that there was a skill level gap between some of us, but we found that to be part of the charm.  You can start hearing our pleas for Luigi to make it through to the end, and at the same time, we ended up having quite a bit of trouble against the windy stage and then some.  I am glad we did not take the first level we went to, or else our death count would have probably been greater than expected.

As a note, Worlds 1-3 were recorded via DVD Recorder and so the visual suffered.  The quality of the recording will increase in World 4 and again in World 6.  Things are starting to get even crazier...what will World 3 bring? 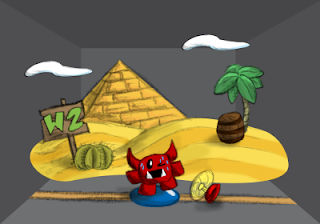 3RM Says: Oh man...two worlds in and I'm already in a sweat.  Good thing
this doubles as a fan...phew...
Posted by ThirdRateMinion at 8:58 PM