At this time, we enter the second of our two recordings from 2011.  The forest world faces us head-on, and we take it upon ourselves to do our darnedest not to die from the giant wigglers, poisonous purple water, and other such nasty things that you would not want to encounter in a forest with three other psychopaths running alongside you.

It was about a year and a couple months since we filmed the original three episodes of New Super Mario Bros. Wii, and we decided to join up again to continue the series, this time under the Third Rate Game Play banner.  We might have lacked the boom mic and the high-end camera to film it, but I think the location helped keep audio in check throughout.  Unfortunately, I was unaware of the spotlight glow behind us that screwed with the camera's brightness levels, but I was able to tweak it a little in post.

This forest was not a friendly bunch of trees for us.  Over the course of our run through the world, Brian found himself dead more often than not, but that is not to say everyone else did not suffer through it, either.  We ended up having to playthrough an extra level because of our needs to keep Luigi's lives as high as possible, but in the end, we had fun, even if there were a multitude of deaths to be had.  Such is the Mario life.

Our next three parts conclude the NSMBWii series from a filming in late 2012.  Be there! 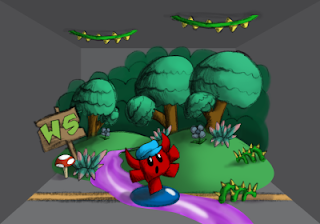 3RM Says: Wooah, this jungle is feisty!  Spiked vines everywhere,
a river of poisonous water, and bugs bigger than me! The brochure lied to me!

Posted by ThirdRateMinion at 8:03 PM