Finally in the last of our sessions, we get up into the clouds and ponder whether we had made a huge mistake or not.  We end up exploring some interesting elements of the world, but we do miss some other surprises that could be found in the Tower stage.  On that note, we make do with our skills and bubble techniques to reach Ludwig and give him the what-for!

After spending another year and some change from our second, two-world recording session of New Super Mario Bros. Wii, we decided to take one final dash through the game right before the release of the Wii U.  There was some thought process that doing this would ultimately result in releasing these videos before New Super Mario Bros. U came out, but our Ocarina of Time playthrough took precedent, delaying the release of these videos until recently.

We filmed this out in a new location, and I am not too much of a fan of the audio.  There was a lot of echoing in the room, and even filling it with blankets did not end the echoing situation.  Still, it was a different experience, one that we were okay with at the time.  We really need to invest in lavalier mics.

I am honestly surprised by how quickly we made it through this world.  Perhaps it is shorter than anticipated, but it is among the shorter levels in our playthrough, even with the long levels and crazy activity within them.  We ended up finding a secret exit that allowed us to skip a treacherous level, so that certainly helped.  The castle level became a bloodbath, with lots of disorganization resulting in the deaths of several of us many times before reaching the boss.  Bubbles could not save us from ourselves and giant spiked pillars.  Interestingly enough, the deaths were a bit more balanced this time around, well excluding Blue Toad, but he's the outlier.  Don't mess with Blue Toad.

One more section remains...and what a world it is! 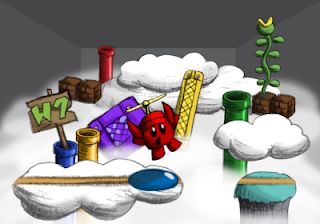 Posted by ThirdRateMinion at 7:30 PM