Within the Indie Megabooth, Icelandic indie developer Lumenox Games was in the mix showing off its debut adventure title, Aaru's Awakening.  I got to speak with Johann from the team about the game and how it all came together, and I also got to play through some of the game which was fully unlocked for PAX East.
Aaru's Awakening is a side-scrolling platforming action game in which players control Aaru, the last remaining warrior from the domain of Dawn.  Dawn and his three brothers, Day, Dusk, and Night must remain in balance for the world of Lumenox to thrive, but Night decides that he wants to take over all domains.  It is up to Aaru to go through the four domains and to Night to stop him and restore balance before it is too late.

When you first look at the game, you will see that everything is made in a hand-drawn style.  From Aaru to each monster to the backgrounds, the world is cascaded with inks and painted colors which are not seen typically in games.  Johann told me that the Art Director was inspired by 70's comics and comic movies, and I can definitely see the resemblance of an action comic in Aaru and his world.  Regardless of its origins, Aaru's Awakening is a beautiful game to look at, and the environment seems natural and yet so unique from our world's offerings.  Monsters and smoke are fully-animated frame by frame, further showing how much detail was put into the game's art design.  There was a moment or so of slowdown, but the game was otherwise a delight to see. 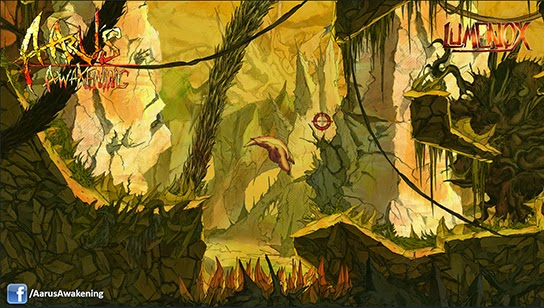 The goal of the game is deceptively straightforward; reach the end of each stage in order to progress through the domains toward Night.  Aaru has to dodge monsters, climb cliffsides, and the avoid harmful elements each domain provides.  Thankfully, Aaru has two abilities by which he can travel through these worlds: a powerful Dash and a Teleportation abilitiy.  Players control both Aaru with the keyboard and a reticule using the mouse.  When Aaru dashes, he dashes toward the reticule, allowing for some maneuverability while in mid-air.  More important is the Teleportation ability; when you click the mouse, Aaru throws his soul outward as strong as the button was held.  While in the air, you press another button, Aaru will teleport to that spot.  This allows Aaru to get through small tunnels or avoid danger, and mixed with his Dash ability, teleporting around the stage will help greatly avoid death.  Thankfully, the game is aware of the difficulty from combining these abilities, at least early on, and there are plenty of checkpoints between particularly tricky encounters.


Those expecting the same obstacles throughout the campaign will be surprised to find that is not the case in Aaru's Awakening.  In Day, for example, lava and harsh sun rays lay waste on the landscape and harm Aaru as he ventures onward.  In Night, however, electricity pierces across waters, and clouds of smoke block the player's view.  Furthermore, each world is displayed in a different array of colors, making them stand out form each other and help emphasize the passing of time toward the dark domain of Night.

If this is Dusk, I can only imagine how deadly Night gets!


Aaru controlled pretty well, overall, and there were few times where I felt the game was at fault for my failures.  I did find moving the reticule more complicated than I initially thought, but as someone who is more a controller gamer, I can see that issue being more personal than related to the game.  Besides, by the time I got to the end of my playtime, I was getting increasingly used to the controls either way.  I do wonder how long the actual game will be, though; my short playtime went through all of Dawn and into the second stage of Day.  I have a feeling that progression is faster at the beginning due to the easier stage layouts, and there could always be more lengthy stages later on as you near Night's Domain.  Also, with the game's current gameplay mechanics, I have to wonder how the game will play on consoles without mouse controls.  I imagine we will find out in due time!


Aaru's Awakening is scheduled for final release in June for PC and Mac, although they are also working on other consoles as well, PS3 mentioned specifically.  If you want it on Steam, get it greenlit now!

For more on Lumenox Games, click here.
Posted by ThirdRateMinion at 2:14 PM