A year has passed since we last saw Yacht Club Games debut their game Shovel Knight to the public amid the launch of their Kickstarter campaign, and now that it is nearly time for its release, we got to chat with Captain Sean Velasco about the game and to try out both demos available at the PAX East 2014 showfloor.  As I'm sure many people have said in the past, we totally dig it.


Shovel Knight is a platforming action adventure game in which players control Shovel Knight to save his betrothed, Shield Knight, from the dark Enchantress and the Order of No Quarter.  The game is situated in a stage-by-stage basis, facing the blue armored hero against each member of the Order at the end of each stage.  Furthermore, there are additional encounters that appear as Shovel Knight travels around the map, each with their own special powers and benefits to defeat.  These additional encounters consist of characters created by the Directors for a Day backers on the Kickstarter campaign, including Best Friends Play's The Baz.

The game pays homage to Mega Man in its stage-like format, but in gameplay it plays somewhat of its own tune, mixed with hints of Zelda II combat elements.  Shovel Knight attacks and digs with his shovel, and while airborne, he can use said shovel to plow into enemies from above.  This pogo-esque technique is in turn used to traverse across certain enemies and platforms in order to reach paths otherwise inaccessible to the knight.  The shovel is not all he can use, however; over the course of the game, players can find and purchase special weapons which improve Shovel Knight's mobility and attack prowess against the Order.  These special weapons range from a fire rod to an amulet that temporarily makes Shovel Knight invincible (which was very useful for my playhtough)!

In my playtime with Shovel Knight, I dove headfirst into The Lich Yard, the stage run by the dark and mysterious Specter Knight.  The graphics popped out with a familiar retro style that resembled such games as Castlevania, and the music further brought nostalgia, which was odd for a game that was brand new.  As I progressed through the stage, more enemies filled the screen, and yet the game remained as steady as ever in framerate.  Giant skeletons came to life, leaping toward me as I shoveled at them diligently.  In particular stretches of the level, lighting would strike, causing the world to flash and platforms to be revealed; when the lightning had passed, all that could be seen were the ever-approaching ghosts I had so foolishly awakened.  All the while, the background was interspersed with broken down structures and large, monstrous trees.  Specter Knight himself was an animated delight, cape swishing in the wind while throwing a spinning scythe toward Shovel Knight's throat.  Even for a game shown in a retro style, animation and atmosphere was top-notch. 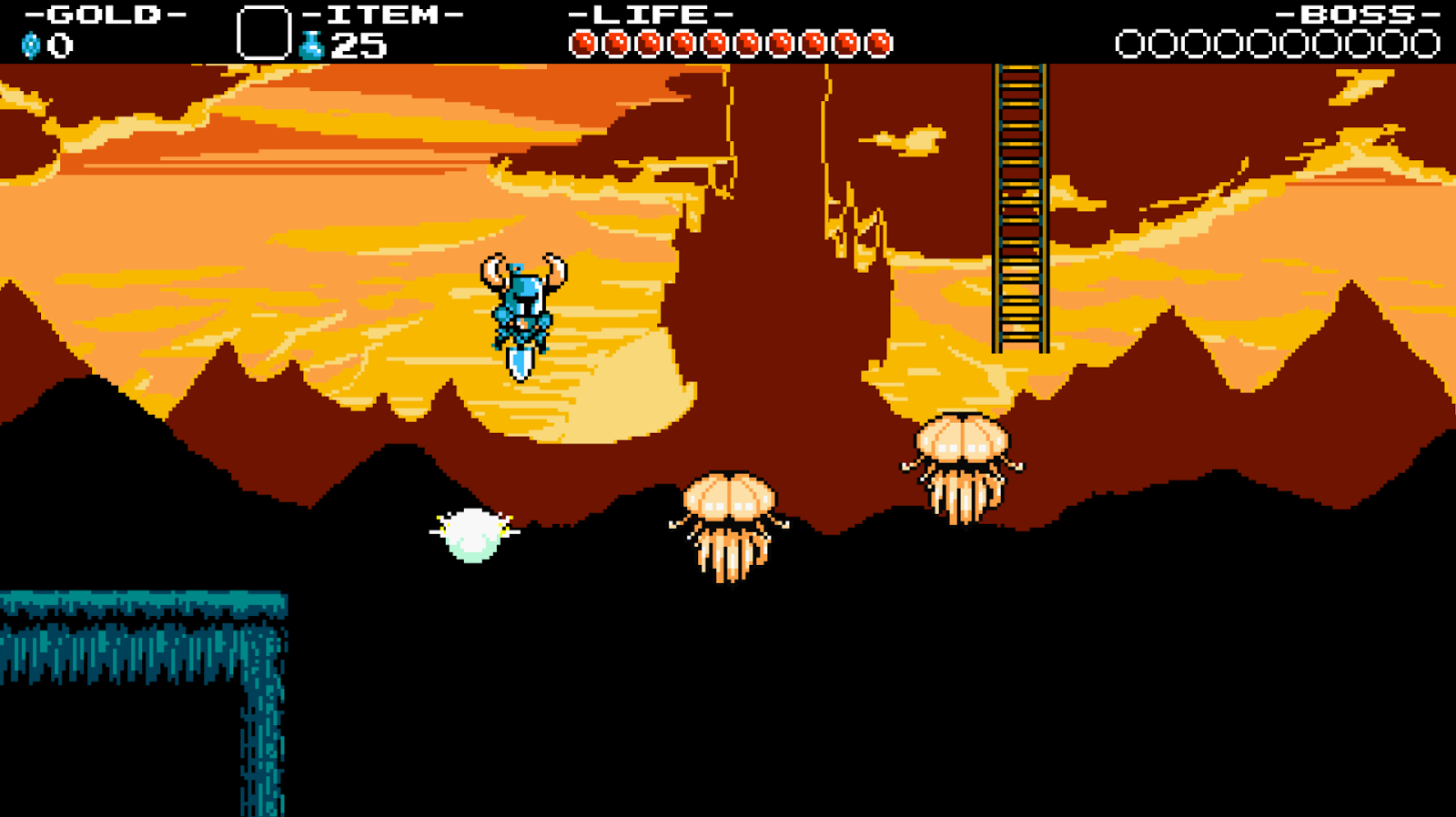 Jellyfish?  More like Helifish, am I right? ...I'll see myself out.

The stage itself was surprisingly long, especially compared to Mega Man stages.  It took me over ten minutes to reach the end of the stage, and I still missed out on a number of secrets, I would imagine.  The game thankfully provides multiple checkpoints for use, but for those who want the highest score, the checkpoints can be destroyed for that extra boost in score.  Of course, the stage may have been long, but it was not monotonous or anything like that at all.  The stage continued to get more complicated, starting with just skeletons and ghosts, and then lightning storms and sinking platforms entered the stage design.  By the end of the stage, these concepts had been heavily adjusted and combined multiple ways to ensure the most difficult challenges arose near the Knight himself.  I should note that Sean Velasco said Specter Knight's stage is only the third, and with many more Knights and stages ahead, I can only imagine what the team throws at us later in the game.

I was playing on the PC version via a PlayStation 4 controller, but the game will also be on 3DS and Wii U when it launches.  Those who play on 3DS will be able to play in semi-multiplayer battles via StreetPass, and on the Wii U, users will be able to use the Digger's Diary to post hints and drawings onto Miiverse on a room-by-room basis.  Initially, the game will have just the main game, but additional campaigns and modes will be added to Shovel Knight over the next year or so, making an already solid-looking adventure into an even more awesome product.

Shovel Knight is slated for release sometime soon for PC/Mac/Linux, 3DS, and Wii U.  For more on Shovel Knight, click here.

It has been a year since I last played Shovel Knight at PAX East 2013, so I was more than excited to try the game out again during PAX East 2014 at Yacht Club Games booth. They had both the PC and the Nintendo 3DS demos playable with two new stages, and I had my hands-on time with the 3DS version to play the introductory Plains stage.

The overworld from last year had been changed to resemble a world map similar to Super Mario Bros. 3, which gives the game another call-back to classic 8-bit titles while also being more useful for the stage setup. Also, I started out with the Fire Rod item, which I originally found hidden in a chest in the last game build, though this was likely due to the demo itself. Besides that, the game played just as fast and responsive as before with a bunch of unique enemies and new stage gimmicks. The grass-laden stage was designed to teach the player the basics of Shovel Knight such as destroying dirt blocks, using ladders, and attacking enemies like beetles or skeleton knights. The stage was designed around getting used to the downward strike, which has Shovel Knight pointing his shovel blade downward to hit objects and monsters below as he falls. This ability was used several times throughout the playthrough, whether it was digging downwards through dirt or jumping off obstacles to reach higher areas.  The entire level felt well-paced, as the stage’s difficult increased naturally with stage hazards being mixed together with more foes. While I did not die, there were plenty of checkpoints to respawn me if necessary, making progression not too frustrating for those who are more careless than expected.  Then again, I was informed that in the final game players can chose to destroy the checkpoints for money, so perhaps frustration could still appear for those playing with luck. 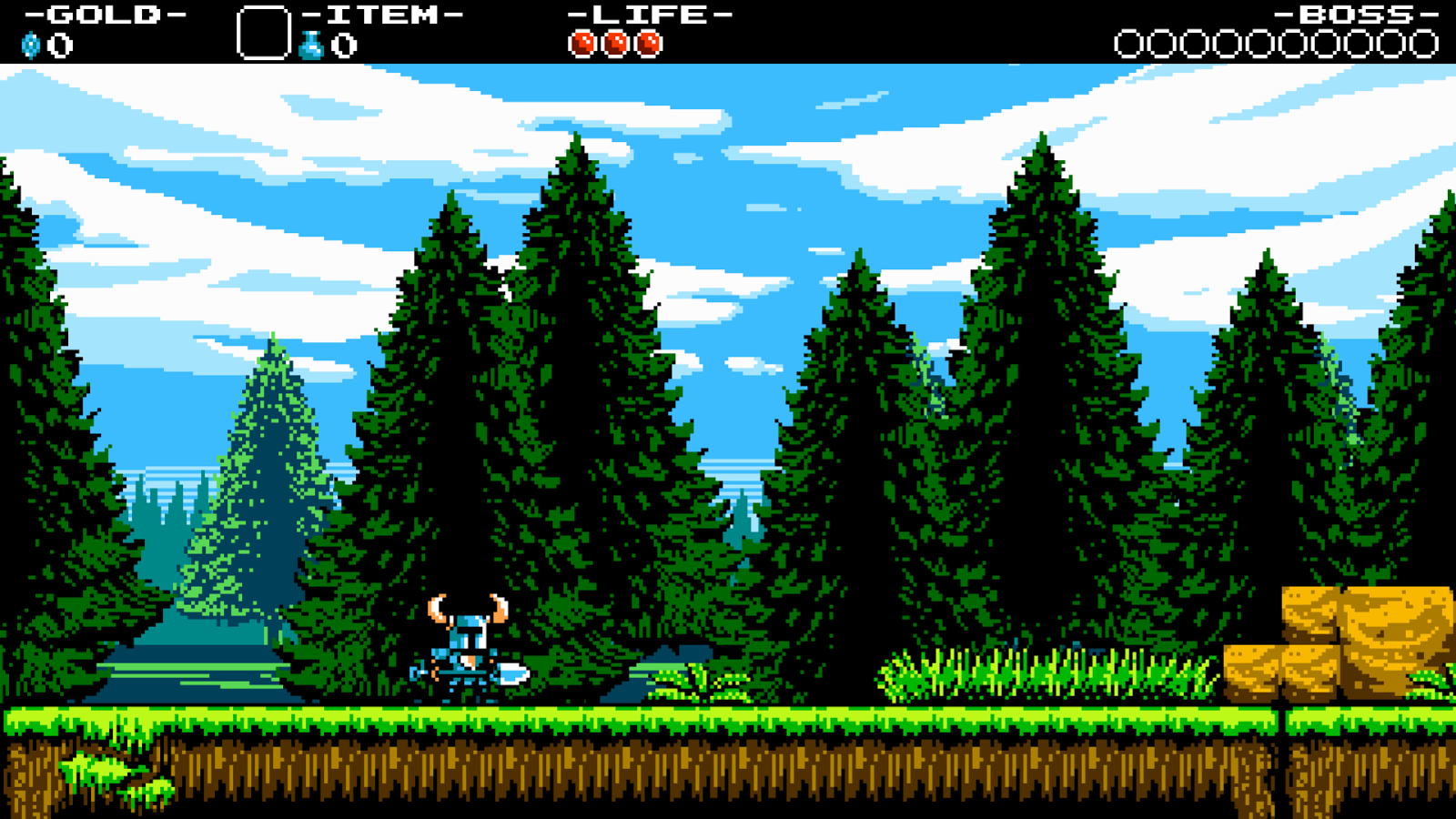 One philosophy this game shares with classic Mega Man games is the ability to teach the player about stage gimmicks before implementing them in life or death situations. Early in the stage, I encountered a large bubble that could be used to pogo onto another platform. Luckily, it was positioned above solid ground, so mistakes could be made. Later in the stage, I encountered the same bubbles again, but this time over a large chasm. Using my experience from earlier, I could easily cross over the pit to collect a hidden treasure resembling a sheet of music (which I suspect to be the game’s soundtrack). Another example was with the stage’s mini-boss, a large sleepy dragon that would breathe bubbles galore to keep Shovel Knight away. When first encountered, the dragon is resting on solid ground; however, on the second time I faced the dragon, a pit stood below its head. As the dragon moved back and forth, one misstep could have Shovel Knight fall right into the hole. By having the player face these mechanics and enemies in a controlled setting, Yacht Club Games can then reintroduce them with increased challenge without player feeling the game is unfair.

If there is one thing this game has is secrets. Besides the hidden music sheets, I also found golden chests that were loaded with precious gems to build up my score. Finding these secrets can be as easy as going to the left of the screen rather than the right or more challenging such as bouncing off a small dragon to reach a hidden ledge off-screen to find more treasure. One unique feature I found during my playthrough was unique rock in the wall that would cause explosions, opening up whole sections in the wall to reveal treasure and other goodies. There were so many hidden nooks and crannies in the Plains alone, and I cannot wait to tread through the stage again to find more.

At the end of the stage, I faced off against Shovel Knights rival, the Black Knight, who uses his own black shovel against our hero. He would move about the battlefield and swing his shovel if you got to close; he even had his own downward strike! His speed and tendency to attack when I got close made it difficult to face him head on. Luckily, Black Knight would occasionally stop and laugh, leaving him wide open for a few hits. Like a good rival, even after defeating him, he quickly jumps up and runs away, more than likely to fight another day.

Graphically the game speaks for itself. The pixel art is highly reminiscent of classic video games but pushes itself beyond what was capable with old technology. The use of parallax scrolling adds a sense of depth to the title and the use of color contrasts helps give the game a unique appearance as well as a way to pick out the characters from the environment. The silhouetted environments also hide secrets which can be revealed through explosions and shovel alike. The fluid animations also breathe life into the game, from the way the dragon moves to the way Black Knight fell flat on the ground in defeat. The subtleties in each frame of animation just shows how much effort was put into each character and sprite. As for the music, just listen to it and enjoy. It screams classical adventure and is catchy in ways only 8-bit tunes can be.

Playing the title again, I have no doubts that this game will be impressive. The gameplay is quick, action packed, and fair. Its ability to teach the player about gimmicks and then turn up the challenge is straight out of good gaming design 101 that some games today forget. The hidden secrets scattered throughout the stage will have gamers looking in to every spot to find them all. Finally, the games art and music make callback to gaming of old while still standing tall on its own merits. The people at Yacht Club Games told me that Shovel Knight will be out soon. Good. I don’t think I could last another year for another Shovel Knight fix.

Posted by ThirdRateMinion at 9:34 PM