In the middle of the Indie Megabooth, developer Refract Studios was present to show off the latest build of their high-speed futuristic driving game Distance, and we got to speak with Kyle Holdwick and get some hands-on time with the game.  Check out what we thought after the jump!

The futuristic racing genre has been on the fritz for a while.  F-Zero has not been released since the debut of the DS, and Wipeout has been left alone since its PlayStation Vita launch title.  Thankfully, Distance is well on its way to fill that now empty niche, and it does so with a slick presentation throughout.

Distance is the spiritual successor to Nitronic Rush, a futuristic racing title developed by most of the team while at DigiPen.  In Distance, the players control a vehicle in a vast city with roads in every which direction.  The aim of this trip, in the end, is to find out if any more organic life remains in the city...or even the world for that matter.  Of course, to find such life, the car must rush through the city and avoid every obstacle, even the city's own violent drones.  What will the player discover by the end of the journey?  We will have to survive the many city trials to find out. On the open futuristic road...erm, are we on a road or a wall?

Distance is more than just a racer; it is more of a racing stunt adventure game.  In the main game, players control a single car as it rushes through each Sector of the city.  The car can do plenty of non-traditional actions expected of a car; it can jump over barriers and can even fly in the air with extended wings.  With boosters on the side, the car can also physically ride on walls, making it one capable vehicle for just about any terrain in the city.  Players will need to use these abilities wisely, as the Sectors are full of a wide variety of obstacles, all blocking the traffic's path.  These obstacles range from moving walls to giant spinning saws.  Kyle's favorite obstacles are the laser beams, which cut through the car procedurally; if a hit vehicle can make it to a checkpoint, though, the wound will heal right up.

The world might not be as immediately colorful as what was seen in Nitronic Rush, but the aesthetic is unified and ultimately fitting for the dark and ominous cityscape.  The game's glowing landscape reflects and covers the road well, and bloom lighting continues to add accents to the fast-paced experience.  The music is equally solid, beating heavily and matching the electronica vibes quite apparent in the futuristic world, mixed with insane tricks and traps alike.  I am not sure how much more Tron-like this game can get before Disney gets antsy!  Either way, the game moved smoothly, and blur effects really help show the speed of the cars rushing through the cityscape. 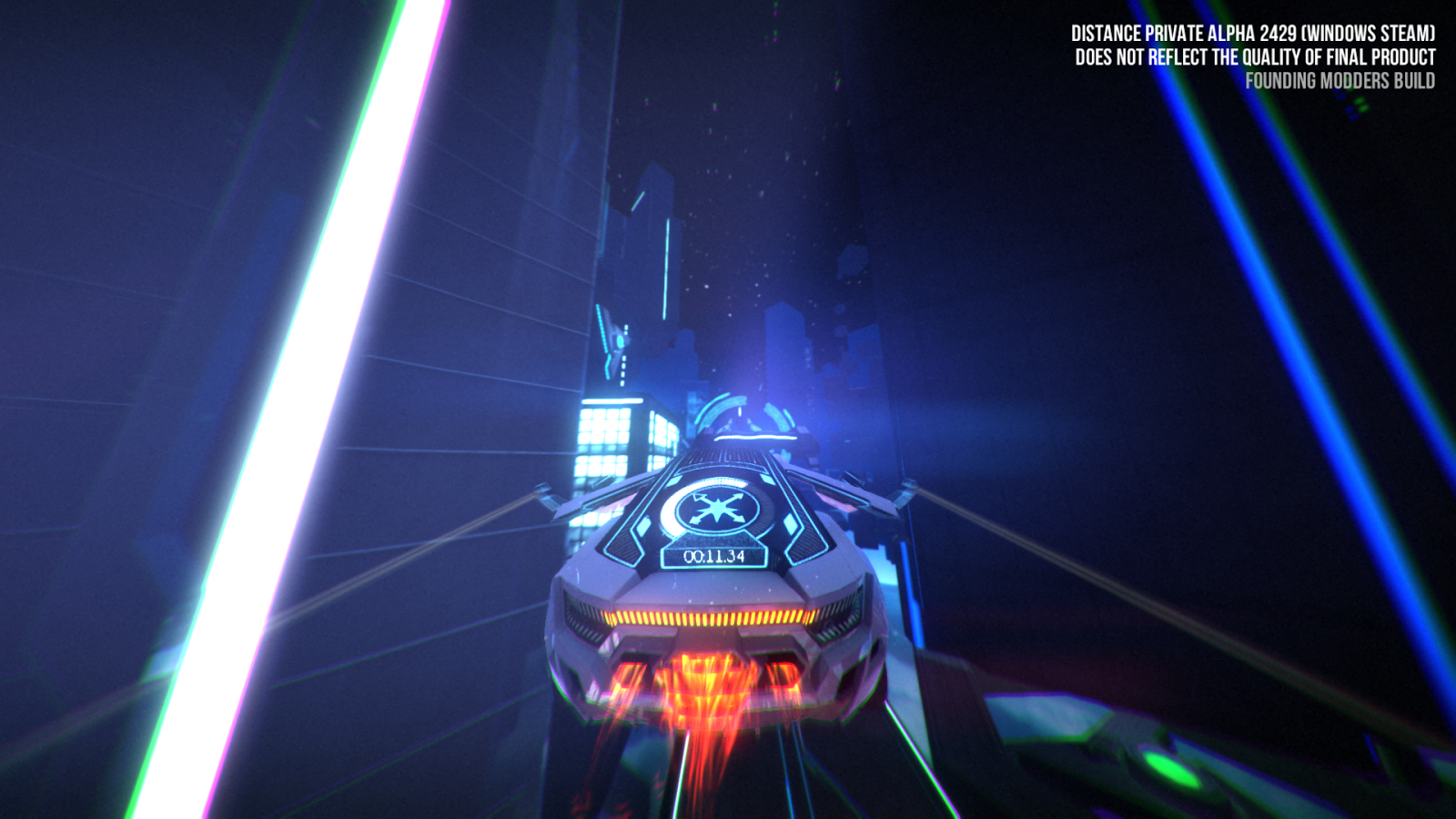 In the future, we don't need roads.  Well, at least for a little while.

I have to admit that I was playing earlier stages of the game, and so the intensity was not as high as it will surely be later down the line.  The game started pretty simple at first, which was to be expected, so I was glad that things were starting to heat up as my playtime progressed.  In one instance, I ended up missing the track entirely, but my car grabbed onto the nearest building, allowing me to drive along the wall and begin an odd traversal back to the track.  It was a crazy moment like this that made me consider what could potentially be on track for the future.  By the time my playtime was over, I had gotten to stages that were full of spinning blades and walls of lasers within a tunnel.  I have a feeling the intensity would only go up from there.  As a fan of the late Rush series, I am very much looking forward to seeing more as it arrives.

While I was playing by myself, multiplayer will be a growing asset to Distance, too.  Kyle let me know that they are still experimenting with ideas, such as Reverse Tag or Soccer games using the cars.  The game looks like it will be bound to have a good number of game modes, and with the Beta coming out for Kickstarter backers soon, Refract Studios is looking to hear all the feedback they can before the game gets ready for its first full debut.

Distance is coming to Steam at some point in the future, with the Beta steadily nearing release.

For more information on Distance, check out the site here.
Posted by ThirdRateMinion at 11:06 PM