Renegade Kid was at PAX East showing off its games on Nintendo 3DS both new and old, and there we got to try out a build of its latest 2D offering, Treasurenauts.  We have gameplay footage from the floor, and we have impressions after the jump.

In Treasurenauts, players choose a particular treasure hunter and one of three weapon types to use in a multitude of dangerous and equally rich environments.  Players rush through each stage, collecting as much treasure as possible throughout the vast landscapes while attacking monsters and avoiding giant ghosts and traps along the way.  Getting hit causes multitudes of treasure to pour out of your character’s pockets, and if you get hit without any treasure, you are defeated.  There is plenty of risk and reward in Treasurenauts, risking your fate versus multitudes of treasure to line your pockets!

The game has two different modes.  In the game’s original mode, players are told to travel through the game in two hours and collect a million dollars in treasure to beat the game.  However, after some consideration, Director Jools Watsham decided to expand on the scope of the game and allow players the ability to play at their own pace.  In this new mode, players can save the game and move at their own pace around the interconnected world as they try to find its most prized treasure in the land.

The demo offered three characters to select: an Indiana Jones-like character, a ninja, and Max from Mutant Mudds. Characters control the same, with the biggest differences being focused on weapon choices: Sword, Gun, and Bomb.  Swords require close-and-personal battles against enemies, but its attack power is stronger and more agile.  Guns shoot slowly across the screen and do slightly less damage than the sword, but sometimes distance is welcoming, even in crowded spaces.  Bomb is the least spontaneous and most dangerous; you have to time the throws and try not to get caught in the explosions, too!  The different weapons change how each stage is played, adding to the replayability of the game.  Furthermore, players will unlock special movement abilities by defeating the game's big bosses.  If they are all anything like Mama Crab, we are going to be in for a treat! 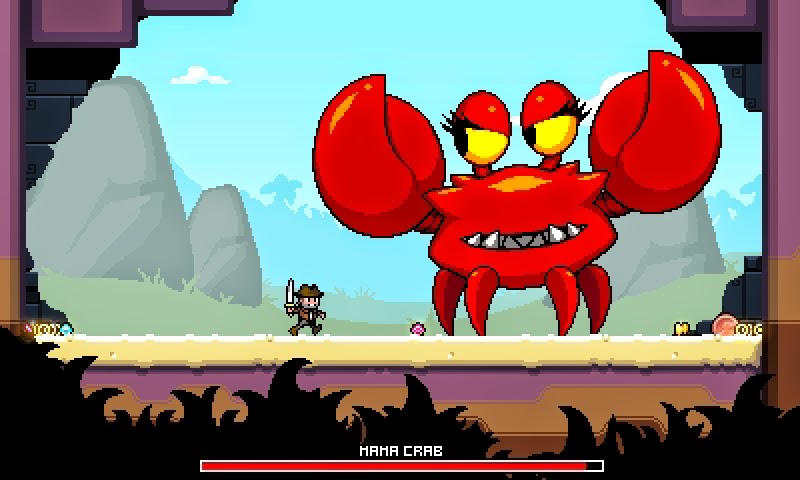 This mama is rather crabby all the time...

While the characters are smaller in Treasurenauts versus Mutant Mudds, the game still looks great, and the game moves at a steady framerate even with all the treasure and enemies flying everywhere on screen.  Enemies have smooth animations, specifically the boss Mama Crab, and the clean lines and sprite details looked crisp on the 3DS XL screen.  I am concerned that the original 3DS might prove to be too small for some of these details to be seen as clearly, but on the 3DS XL the game is a solid 2D showpiece of both 8-bit-like and 16-bit-like sprites alike.  Like that?

In my playtime, I first dove head-first into the Beach world, slicing my way through bats and crabs alike, but I was also careless more than a few times, and I lost plenty of treasure along the way.  I enjoyed how the world reacted to each slash of my sword, enemies flashing and treasure chests shaking violently.  The music in this world was especially playful and adventurous, matching the desire to go hunting for glorious treasure.  Feeling rather brash, I then jumped right into a Cursed stage with bombs equipped, and what a mistake I made!  The tension was much higher, with ghosts chasing me down every which way.  In these cursed stages, ghosts continually multiply and chase down the player, but attacking a special orb causes them to scatter and weaken for a short time.  The risk vs. reward element is pushed to its limit here, and in my case, I let the orb go untouched for too long, and I was quickly cornered by as many as five giant ghosts and lost the stage.

As tense as it got, it was a fun romp running around the stage, dodging what I could in a desperate attempt to find the exit.  I am sure these stages will be the most entertaining to watch someone play over their shoulder, just to see their reactions.  Or, if the player wants, we can play cooperatively and share the reactions together!  Director Jools Watsham wants this game to be experienced easily, so the game only requires one version for a two-player game to play, and together, a player and his or her partner can take the world (and its treasure) by storm! 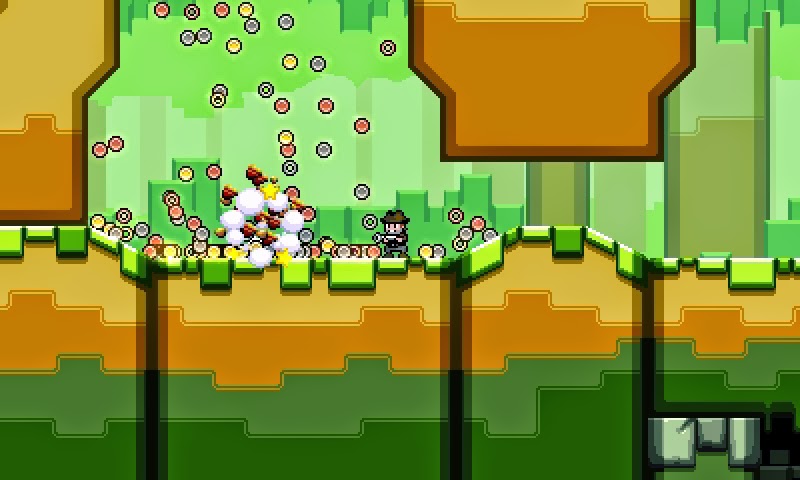 Outside of my concern for the sprite size on a smaller system, the game felt right.  There are quick movements in the characters, and the different abilities used in the game help make traversing each world feel quite unique, even if you are traveling through the same areas more than once.  I wish I could get more hands-on time with the game at PAX, but what I had time to play convinced me not to worry about dropping some treasure when this comes out.

Treasurenauts is currently slated for a 3DS and Steam release early Summer.  Jools Watsham talked about the game in our in-depth interview seen here.

For more on Treasurenauts, check here.
Posted by ThirdRateMinion at 8:44 PM