Capcom's booth was among the most active of the show, which made recording footage and grabbing any brief interviews hard for us on Friday. Fighting games such as Ultimate Marvel vs. Capcom 3 and Street Fighter X Tekken were crammed in the middle of the booth, while other adventures, such as Asura's Wrath and Dead Rising 2: Off the Record, were available for play around the outside. Asura's Wrath in particular drew crowds due to the Rage Booth, but in the chaos, we decided to take a look at Capcom's next large franchise: Dragon's Dogma.

Dragon's Dogma takes place in old medieval times, and the player's created hero becomes the unfortunate victim of a large dragon. With the hero's heart removed and held by the dragon, the hero should be dead but is instead revived as an "Enlightened One," driven to find the dragon and get vengeance. The game is prepped to be an open-world adventure, full to the brim with massive monsters and large, sprawling lands to travel. 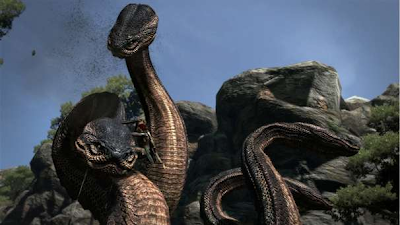 I don't know about you, but I think that adventurer is about to be Hydra food.
The actual demo was located in a small alcove with four demo stations facing each other, and in those demos, I had the choice of a dungeon or field-based scenario. There were not many people at this game, and after playing the demo for a short while, I realized why that may have been the case.

In the field scenario, my hero was with a group of NPCs, including an archer and a wizard, as they approached a number of monsters wrecking a small convoy. Without much hesitation on their part, the group rushed toward them, and I found myself in a bit of a bad situation. I was being thrown into battle with barely any knowledge of how the game played.

While this scenario was loading, I was met with a gargantuan, complex control screen. It seems I had missed out on some pivotal information, as my progress fell flat early into the demo. I tried to find a way to run and could not, and I quickly found my attacks to be less effective compared to those from my entourage. Before I could really get a grasp for my inventory, I was met with a greater foe: a massive griffin who had a taste for adventurers. 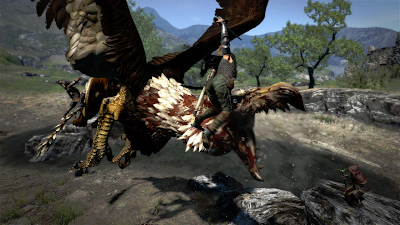 Had I been better, this might have been the outcome.
This was when the battle went from cumbersome to chaotic. I could attack the large monstrosity with my short blades easily, but in the air, I was met with difficulty. A wizard informed me that his flames would hurt the griffin greatly, and the archer let me know to attack its wings with my bow and arrow. Without any prompt or hint of how to use my bow, I started to pull it out, only to completely miss or mess up with my attacks. Less than a minute later, I was informed, yet again, from my NPCs. I got some more hits in, but still the others called out to me as if I was failing greatly. Shortly thereafter, convinced I was getting nowhere, I ended my playthrough. 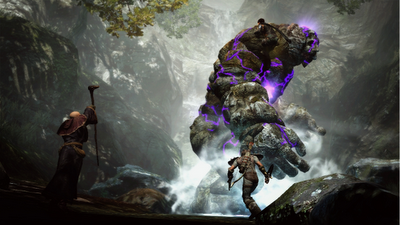 They are helpful, but the others are also quite annoyingly verbal.
Was Dragon's Dogma bad? No, it was probably more the environment and lack of knowledge toward the game's control that threw me off than anything else. However, if this game is coming out early 2012 (which it is), there needs to be some level of polish in how the characters act and how the game flows. The graphics look nice in stills but chugged along way too slowly, and the controls were certainly not more accessible, despite what the director said in the past. Hopefully the final product will deliver better than this demo did.

See below for the video of my experience. Dragon's Dogma is slated for March 2012.

Posted by ThirdRateMinion at 5:33 PM