---
Last year, we got the first console Kirby adventure in a long time, but soon, a classic Kirby adventure will emerge for the Wii. This Comic Con, we got our hands on a part of the game, and it was all charm and no fuss.

Kirby's Return to Dreamland stars Kirby in his attempt to help out an alien being, whose ship has crash-landed onto Pop Star and scattered its pieces throughout the planet. Thankfully, Kirby is not alone in this adventure; if more than one player wants to jump in, they can either join in as different colored Kirbies or play as King Dedede, Metaknight, or a spear-touting Waddle Dee. 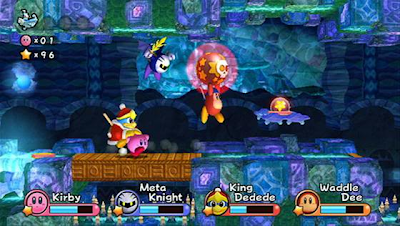 Even while cooperating, King Dedede treats Kirby with little respect.
Kirby's newest console adventure from HAL is as bright and inviting as any Kirby game in the past; while it lacks the severe heart attack-inducing cute levels of Epic Yarn, this game certainly fits the mold of a delightful platforming adventure. The game's graphics were very colorful and cheerful, very much how a Kirby game should be. The animations were smooth, so smooth that you could see the pink puffball jiggle with each movement he made. 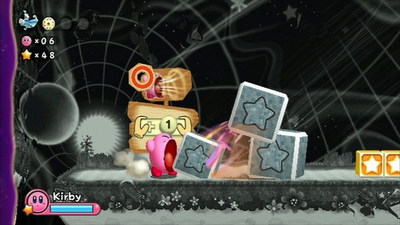 Keep your jaw open like that and it will get stuck, mister!
The controls were very responsive, even when using the motion controls for the new Super-Inhale move. Shaking the controller to initiate the attack felt very natural, turning Kirby into a motion-controlled vacuum. The Super-Inhale is not the only new ability; Kirby also can obtain extremely-devastating Super Abilities. I got the Ultra Sword ability in the demo, in which Kirby pulls out an over-sized sword and slashes at everything in its path; at the event, anyone who saw this move called Kirby hardcore. There are quite a few more Super Abilities, so all those haters better beware! 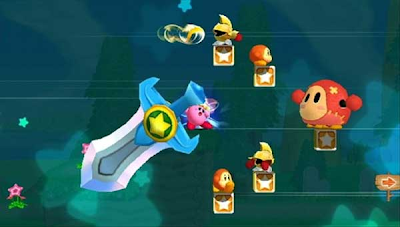 Thunderkirbies, HO!
Do not judge this game negatively because of last year's Epic Yarn or this year's Mass Attack. If you want a traditional Kirby game with four-player co-op and plenty of super moves, this is the one to get. This is a definitive Kirby game. Although I did not play the game with anyone else, the impressions of multiplayer experiences with the game were fairly positive. Check below for a brief video clip of the demo.

Kirby's Return to Dreamland will be coming out today, October 24th.
Posted by ThirdRateMinion at 10:57 PM