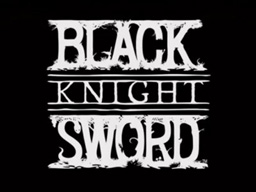 Grasshopper has been the source of many unique games over the last few years, and 2012 is looking to be no different, except now the developer is making games for downloadable distribution!  After working alongside Digital Reality on Sine Mora, the collaboration continues with the dark fantasy, Black Knight Sword.  I got to play it at PAX East 2012, and from my time with it, I was impressed with the style if a little concerned about its gameplay variety. [Check after the break for my brief impressions]

Black Knight Sword begins with our protagonist of sorts attempting to hang himself, only to find his attempt fail and place him before a pile of dark, ominous armor.  Upon lifting up the armor's sword, the armor attaches to him, and with newly-found magic powers and dark weaponry, his quest begins.  Following the trail of the sword fairy, the knight must head onwards to defeat a tyrannical princess, but what truly lies at the story’s end?  Frankly, I am not sure, but from the poetic storytelling, it is most certainly going to be poignant.

Black Knight Sword is a side-scrolling action title with an artistic twist.  The game's style is based a classical Japanese Kamishibai, or paper drama, presented to the audience on a stage.  This style is further emphasized by the doll-like character animations and unique monster designs.  As I progressed through the demo, the background, which appeared to be made of paper cutouts, slowly peeled away and be reformed into new locales, by far one of the most entertaining elements of the game.  I would walk through a doorway, and the walls and staircase would fall away, only to be rapidly replaced by a burning cityscape.  Surrounding this aesthetic was a slow, melancholic voiceover which only enhanced the grim designs of the dark fairy tale.

In regards for the actual gameplay, Black Knight Sword delivered from the demo, but I worry whether the game will change up the formula or leave it be as simple as it was.  During the game, the player slashes at enemies which then produce beating hearts to use as currency.  This currency can be used to purchased upgrades and new weaponry for the knight, although I had not played long enough to reach one in the demo.  In order to emphasize a platforming element known to old-school action titles, there are a number of platforms which can only be activated when the dark fairy touches them.  Between launching the fairy at platforms and slashing at foes, the gameplay remained mostly simple for the most part.  Still, if the game is capable of using these both in unique ways and with the additional store-bought upgrades, the flavor should remain fresh throughout the game's length.

Black Knight Sword is slated for release sometime this year for PSN and XBLA.  If you haven't already, check the above video for some gameplay footage shot from PAX East 2012.
Posted by ThirdRateMinion at 2:53 PM