Costumes Quest Gets Cold as Ice

Double Fine Productions has announced that it is creating a new downloadable chapter to Costume Quest, its trick-or-treating adventure released last month.

The chapter, entitled Costume Quest: Grubbins on Ice, is an additional area that takes place following the main game's storyline. The adventure begins when Lucy and Everett, the two additional team members added over the course of the original game, explore around town to find evidence of the Grubbins. Lucy ends up sucked into Repugia, where Grubbins of all sorts live, and she is captured by Araxia, the current leader in the currently turbulent world. Filled with dread and panic, Everett gathers the twins Wren and Reynold to help save her (and the oppressed Grubbins) from the clutches of evil!

Rather than collect candy for the sake of trick-or-treating, the player collects candy from Grubbins in order to gain support from the oppressed and defeat the incumbent political rivals. The battle sequences are the same in style, but there are also plenty of new costumes to create in Repugia, including a Pirate and an Eyeball costume. Furthermore, the game is said to be larger than a normal area of the original game, spanning around five hours to complete. 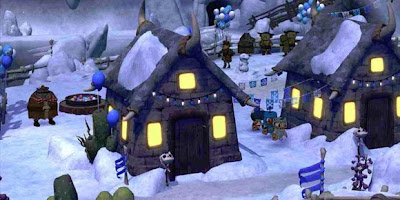 Grubbins on Ice does more than just add a new game segment; it fixes aspects of the main game as well! Performance improvements in frame rate should be noticeable, and players will be able to pause during cutscenes. Perhaps a bigger addition is the ability to save at any time at specific phone posts (in the original release, a player needed to complete a mission in order to save). 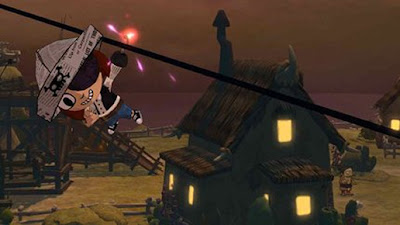 Costume Quest is a trick-or-treating adventure released on PSN and XBLA last month. In it, players assume the role of either Wren or Reynold in an attempt to save the other from the clutches of candy-stealing Grubbins. The children can transform themselves into massive beings based on their costumes in order to battle, and besides that, there are plenty of small missions to complete in the simple-but-delightful role-playing game.

Grubbins on Ice should see release next month for XBLA and PSN. No price has been released.