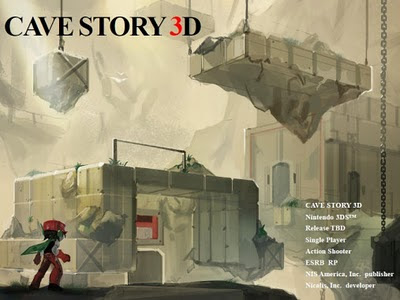 Cave Story 3D takes the original title and remakes it entirely, shifting from the game's classic 2D sprite design toward a more modern 3D-modeled game. The game will still retain its 2D gameplay, thereby making Cave Story 3D a 2.5D game, of sorts. This allows the game's backgrounds to be affected by the Nintendo 3DS's display, adding to the world's large, organic design. A comparison of the WiiWare and 3DS protagonists
The game is being worked on with the supervision of Cave Story-creator Daisuke Amaya, or Pixel. The original Cave Story was released in Japan for free in 2004, but in the past year, the game has seen a revamped graphical release on WiiWare in March 2010 and a DSiWare port this past November. Like in those projects, any art asset or musical change goes through Pixel for clearance before being implemented into the final product. 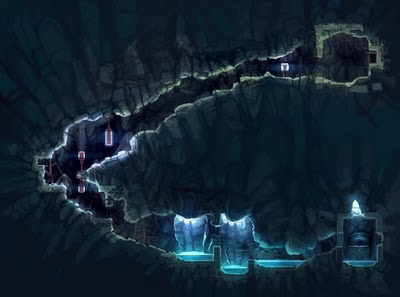 Concept art of the starting cave
Beyond the graphical and musical recreation, Cave Story 3D will include sections and gameplay elements unique to the game. When originally creating the game, Pixel had cut a number of locations and a couple elements from the final product, but in Cave Story 3D, the extra game content will be brought back to create a fuller, richer experience. Furthermore, Pixel says that the reception of this game could dictate whether Cave Story will see a full-fledged sequel in the future, despite his statements prior removing the possibility of more Cave Story.

Cave Story 3D is still early, but Nicalis and NIS Ameica expect to see the release in early summer of this year, close to the end of the "launch window" for the new Nintendo handheld.

SOURCE (and interview): GameSpot GamesRadar
Posted by ThirdRateMinion at 11:48 PM