Shortly after its conference call this past week regarding the future of the company, Activision announced Skylanders: Spyro's Adventure, a new experience in which players use toy figurines to import unique characters into the game.

Skylanders is an action adventure style game, but unlike previous games in the Spyro series, the game makes use of toys, or interaction figures, which are imported into the game via a special portal platform. Players put the figures onto the portal, and the game then puts that character into the game. If a player wants to switch characters, it's as easy as changing which figure is on the portal. Each figure also saves the character level data, allowing people to keep their progress as they switch characters or travel to play with a friend elsewhere. 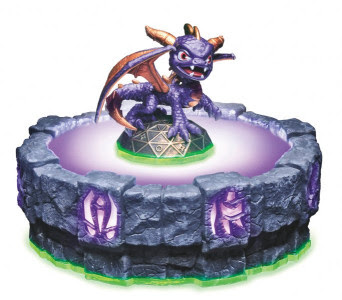 The game will feature a total of 32 characters to choose from, all with their own interaction figure. Skylanders will come with 3 figures, trading cards, and the portal itself. Sounds like a franchise using these figures could arise in the future.

Not only is the game using a unique set of interactivity, but it is getting a number of big names helping from around the animation industry. The character design was done by Shrek character designer Tom Hester, whereas the music is being composed by Inception composer Hans Zimmer. The duo of Toy Story writers, Alec Sokolow and Joel Cohen, are writing the story.

The game's developer, Toys for Bob, was formed in 1986, and before being purchased by Activision had been known for the Star Control series on PC and Pandemonium games on Playstation. Since its acquisition, the company has largely worked on licensed games such as Madagascar. 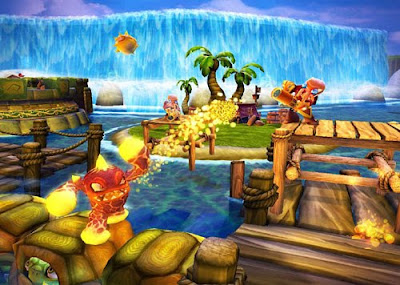 Spyro the Dragon was created by Universal Studios (now Vivendi, which controls Activision-Blizzard) and developed into a three-game series on Playstation with Insomniac Games. Insomniac stayed a Sony-exclusive developer with the Ratchet and Clank series, so Universal gave the game to multiple developers since. The first two console non-Insomniac titles were Year of the Dragonfly, made by what is now Backbone Entertainment, and Hero's Tail, produced by Eurocom. Since then, Krome Studios produced a trilogy of titles, known as the Legend of Spyro franchise. Skylanders brings the Spyro series into its second reboot since its inception in 1998.

No specific platform has been unveiled for the title, although the trailer states that the game would expand to console, mobile, and computer-based releases. It is expected to release this fall.