Resistance 3, the newest title from Insomniac Games, had some new details shown off on its trailer released during this year's VGA awards on Spike TV.

Resistance is a series of games taking place in an alternate time-line in which an alien invasion hits Russia and heads eastward, taking over Britain in the first iteration and heading across Eastern America in the sequel. This iteration takes place across the remains of the United States as people struggle to survive against the Chimera and whatever twisted parts of the human race remain. 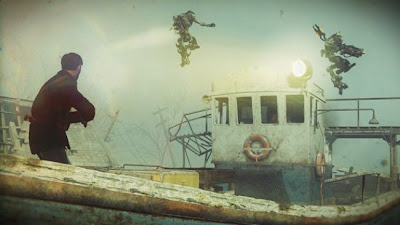 The trailer specifically shows a combination of both real-life and in-game footage. In it, the trailer follows Joseph as he protects a boat from oncoming Chimera, and the end shows him, bearing a sledgehammer, just as he rushes into a fray of multiple Chimera.

Resistence 3's release date has been provided as well: September 6th, 2011. Besides Resistance 3, Insomniac Games is currently working on Ratchet and Clank: All 4 One, also slated for next Fall, and a new franchise to debut Insomniac's multiplatform strategy.