Nintendo began to allow Demos for WiiWare titles as of November of this year, and with each week, there has been at least one new demo released alongside the new titles for WiiWare, Virtual Console, and DSiWare.

In order to help those see what the demos contain, we here at 3RM will explain what each demo contains content-wise relative to the actual game.

Please note that games which have a bronze rating or higher on the Nintendo Channel will keep their demos longer. In order to vote for the games, you must own the full version and have played the full version for longer than an hour in order to recommend it. Once recommended enough, the game will be given a particular rating on the Nintendo Channel.

As a note this week, it seems we have the first demo for a 500 Wii Point game, the cheapest a WiiWare game can get. 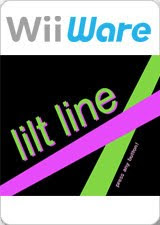 What is it?
lilt line is an arcade survival experience in which players control the trajectory of a line as it moves deeper into twisted tunnels. The tunnels bend erratically, and players have to roll the Wii Remote in order to change the line's direction before it hits either side of the tunnel. Each level contains its own music track, made by dubstep artist 16bit, which brings the game's musical twist into play. Players must hit a button when the players' line collides with specifically-placed
horizontal lines in order to survive, as well; thankfully, these other obstacles are arranged to the rhythm of the song, providing a more musically enthralling and equally intense experience.

What does the demo have?
The title screen allows you to buy the game or play the demo. Upon selecting the demo, players are brought to the minimalistic game menu. Starting with "training," players will be able to complete the first four levels entirely, but part way through the fifth track, "right over," the game fades to black and returns you to the title screen. Any time you fail a level, the game leads you back to the title screen, allowing you to return to the demo or buy the full game. Scores do not save in the demo version, nor does game progress. Therefore, every time the demo starts, you have to go through each level, one-by-one, rather than by choice. 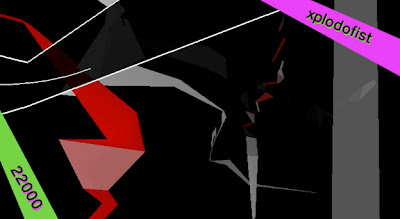 How does it compare to the full version?
For one, the demo seems to demonstrate roughly a third of the game's levels. However, the game's difficulty is magnified quickly after the first two actual tracks, so the actual length of the game will vary for different skill levels. Overall, the main game has 15 tracks, compared to the demo's four and a sliver of a fifth. Furthermore, as the game's major goal is to get perfect scores, and the demo doesn't save scores, it would be apt to say that the full game will have more replay value. If you enjoyed the demo even a little, the low price and the addictive gameplay are a great combination to push for a purchase.