As one of the multiple announcements to hit this year's Video Game Awards on Spike TV, Naughty Dog released its first trailer and information on Uncharted 3: Drake's Deception.

Uncharted 3 follows the series' protagonist, Nathan Drake, as he explores the world with his father figure and mentor, Victor Sullivan. The two are off to find the lost city known as the Iram of the Pillars. As with the previous games, however, he will not find the land without conflict. 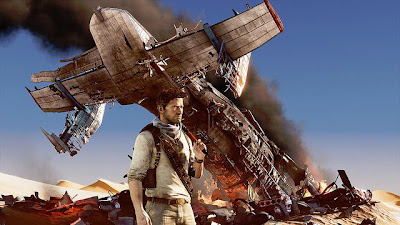 The game will mostly take place in desert locations, as the team wanted to explore and take the challenge of making a realistic and equally entertaining experience in sand-filled locales. The series mainstay of a cinematic experience is most certainly still on the cards for this game, and added tweaks to the control system will ensure it is the tightest adventure yet. Not to mention additional online aspects and multiplayer activities will be included, as well.

One significant part of its debut trailer is the emphasis of the game's release date: November 1, 2011. It is a PS3 exclusive, as is the rest of the Uncharted franchise.