“Unsure of his sister’s fate, a boy enters the unknown.” Certain of Limbo’s amazing atmosphere and frustrating puzzles, I start my review. After almost six years in limbo, Limbo has finally been released on XBLA as part of Microsoft’s Summer of Arcade 2010. Promising nightmare-ish visuals and challenging puzzle-platforming, does Limbo take players to paradise or does it leave them suffering in gaming limbo?

“Unsure of his sister’s fate, a boy enters the unknown.” That line bears repeating because that is the only description the developer, Playdead, gives the players about Limbo’s story. No text, no dialogue, and no explanation. Everything you encounter, whether it is horrifying monsters, deadly traps, and surreal environments, is yours to interrupt. Even the game’s ending left me wondering, “What just happened?” Similar to Braid, another platfromer on XBLA, the story is in the hands of the player, whether that’s good thing or not is all up to the player’s imagination. 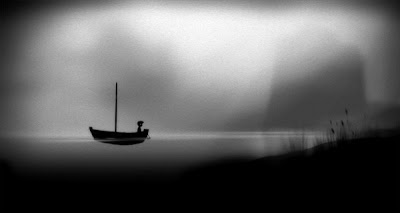 Venturing to the unknown...
Instead of developing an in-depth story, Playdead focused on giving Limbo an engaging atmosphere. Even though the environments are limited to black and white tones, the faded objects in the distance, simplistic forms, and video reel-like filters create an appearance unlike anything on the market. This game’s style is a perfect blend of 2D and 3D graphics to the point where they are indistinguishable. Limbo’s 2D design is so convincing that sometimes I forgot that it had 3D graphics. As for the locations themselves, Limbo is made up of eerie forests, damp caverns, and twisted factories, each giving off a chilling uneasiness and a constant fear that where you stand is not safe. The forest areas feel savage and the machines areas feel cold and emotionless. These emotions are even reflected by the creatures you encounter. Spiders want to eat you, people want to kill you, and brain worms… well… they want to do something bad to you. What Playdead does well in Limbo is create a world where not just the inhabitants want to kill you but the very landscape itself is eager to end your life. In Limbo, the world is the out to get you.

Despite the artistic atmosphere, it disappointed me how the second, mechanical half of the game became empty and less engaging when compared to the forests and tunnels offered in the first half. It felt as though the developer had spent so much time working on the first half, which was filled with devious tricks and monsters, that the later half became comprised of simple physics-based puzzles that one can find in just about any other puzzle-platformer. While there is nothing wrong with that, I just expected more from the game after the amazing first half. 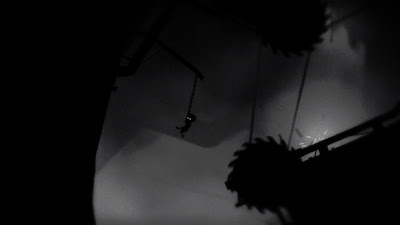 While mechanical is cool and all, the forest was scarier.
Limbo has a limited musical score, which is both eerie and adreline-inducing. Though musical pieces are restricted in use to certain events, they really enhance the game’s sense of danger. If only they were used more often. The sound effects also work well, making the world sound both real and surreal at the same time. There are different sounds for walking on grass or metal as well as very specific, gruesome sound effects for the boy’s various deaths. Since the music is limited, prepare to listen to these eerie sound effects through out the majority of your play-time.

Moving from the atmosphere to the game itself, the game’s formula is pretty simple: walk, jump, move object, or pull lever. You cannot attack any of Limbo’s monsters and you don’t get any more skills as the game progresses. What you start with is what you get. Plain and simple. It is the world around you which changes. Plain and scary.

Contrasting the game’s open story, the gameplay itself leaves little room for interpretation. Every puzzle placed before you usually has one correct solution or requires some precision to overcome. Any other path will lead to death. A very horrific death I might add. In fact, the deaths in this game are so gruesome that there is a warning at the title screen and an option to block out the gruesome depictions, if you can’t stand it. And you will die. A lot.

While dieing at a challenging puzzle is okay the first few times, dieing at the same puzzle over and over again can be frustrating. What frustrated me more was that most of my deaths came not from misunderstanding the puzzle but from the game’s poor jumping mechanic, or should I say hopping mechanic. No matter how much I prepped, practiced, and performed my jumps, I never felt comfortable making them. This may have been done to increase the game’s tension, but as a puzzle-platformer, I felt it was a poor choice. This boy is definitely not Mario. 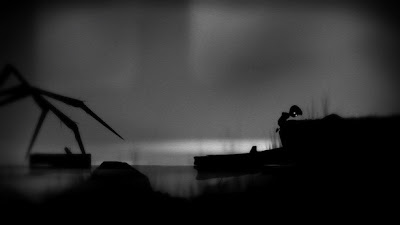 Climb faster, darn you! FASTERFASTERAAAGHH!
Another disappointment is the game’s length. The game’s first playthrough can take between 3 and 4 hours to complete, and that’s with all of the deaths and mistakes you will make along the way. However, once you’ve played through once, the length is much shorter, and for a game that costs 1200 Microsoft Points, I’d expect something longer or with more substance.

The game tries to create replay value with its hidden achievements. Throughout the game are hidden eggs that when squished increase the game’s completion percentage. Besides that, the game offers little reason to try again. Even Limbo’s leader board seems pointless since all of the records are completion percentages. No number of deaths. No competition time. No nothing. This was a wasted resource that could have increased Limbo’s replay value significantly.

Limbo has an amazingly eerie atmosphere that makes it stand out from other puzzle-platformers. Very few games have you question your safety quite like Limbo does as it manages to create a sense of danger even at moments of peace. Beyond the atmosphere, Limbo’s trial and error gameplay is okay at first but once you die several times due to faulty jumps, you will start to get frustrated at the game’s physics engine. With a worthless leaderboard system and lack of other modes, Limbo’s experience is one note, and given the game’s price point, the game should have offered more content. Limbo is a game that pulls you into a unique experience but fails to keep you there for very long.

Try it before you buy it.
Posted by ThirdRateMinion at 7:19 PM