During Nintendo's investor briefing for the company's Q3 earnings report, President Satoru Iwata revealed that Nintendo was producing a new Kirby title for the Wii, as well as a new IP entitled Pandora's Tower.

Nintendo did well this past holiday season, although 2010 still saw a decline in DS and Wii software sales (specifically noted by Nintendo was Microsoft's growth in America and PSP's increase in Japan). As with every investor meeting, Iwata announced upcoming titles for Wii in order to stem some skepticism regarding the platform. 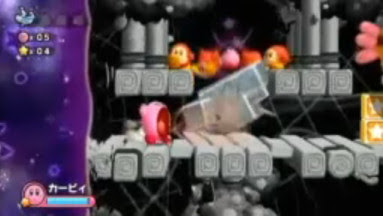 Originally thought to have been canceled, Nintendo and HAL are still working on a new Kirby title for Wii. A 2.5D platformer, the title originated as a GameCube title near the end of the console's life, in which up to four players could work together to fight against a myriad of foes. The game never appeared, however, and with the arrival of Good-Feel's Kirby's Epic Yarn last year, people assumed the project was dead. However, Iwata unveiled that the game is set for a release this year, with a few new twists.

...it’s been a while since we launched the previous home console version of the Kirby game where Kirby can inhale enemies, spit them out and morph, but a team at Hal Laboratory, Inc. is developing a new Wii game from the "Kirby’s Dreamland" franchise now.
- Satoru Iwata, President, Nintendo

In the footage released alongside the announcement, Kirby is shown venturing across various places in Dream Land. Kirby occasionally creates massive attacks using a sword and a fire ability, attacking enemies on screen as well as destroying parts of the environment. New abilities were also shown, including a cannon ability, a whip ability, and a waterfall ability. Kirby seems to be capable of inhaling multiple enemies and items continually for a long period of time, releasing them as a giant star attack. No doubt we will see this game again at E3 in June.

The other announced title was brand new and even more unexpected. Unfortunately, as a Nintendo-published title, little is known about the game except its name and a teaser website. Entitled Pandora's Tower: Until I'm By Your Side Again, the game is expected for a release this half of the year in Japan. It is currently CERO C (the Japanese-equivalent of ESRB's higher-T rating), and the teaser site features an image of a woman's back sporting a tattoo. The character's voice asks a question: "To die in beauty, or live in ugliness, which would you be happier with?" Certainly cryptic enough. The game will most certainly have more details divulged in the coming months.

Other games discussed at the meeting included Rhythm Heaven Wii, Legend of Zelda: Skyward Sword, and Japanese renditions of Just Dance and GoldenEye 007.

There are currently no words on when (or if) the two announced games will release stateside.