In case you do not follow the video game blogosphere and such, here's an interesting tidbit: covers for new game magazines tend to arrive a month in advance to announce new titles! At least when GameInformer is involved. From Epic Mickey to Portal 2 to BulletStorm to Gears of War 3... 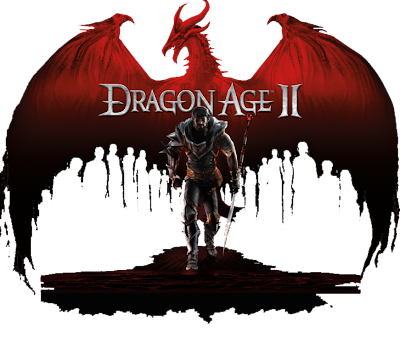 EDMONTON, Alberta--(BUSINESS WIRE)--Leading video game developer BioWare™, a studio of Electronic Arts Inc. (NASDAQ:ERTS), confirmed today that Dragon Age™ 2 is in development at BioWare’s Edmonton-based studio. Dragon Age 2 is the sequel to the triple-platinum-selling Dragon Age: Origins which was named “RPG of the Year” in 2009 by Game Informer, G4, IGN, and SpikeTV. With Dragon Age 2, the world’s preeminent RPG developer is revolutionizing the genre again, infusing the universe with more action, a new, more responsive combat system and a dynamic story that is already among the most multifaceted in gaming. Dragon Age 2 traces the rise to power of Hawke, a survivor of the Blight and a hero who will transform the face of the Dragon Age universe forever. The new game is scheduled for release in March of 2011 on the Xbox 360® videogame and entertainment system, PlayStation®3 computer entertainment system and PC.

“Last year’s launch of Dragon Age: Origins was one of the most successful in BioWare’s 15-year history and one of the most successful new IP launches in the 28 year history of EA,” said Dr. Ray Muzyka, Senior Vice President of Electronic Arts and co-founder and Group General Manager of BioWare. “Dragon Age 2 will simultaneously deliver an epic story and set a new bar for intense action in the genre. We're very excited to deliver this next bold evolution in the Dragon Age franchise to our fans.”

“With Dragon Age 2 we are creating an exciting new entry point into the Dragon Age universe while ensuring that fans of the original game retain a sense of satisfaction and familiarity in the world,” said Dragon Age 2 Executive Producer Mark Darrah. “We are amplifying the things that made Dragon Age: Origins such a huge success while introducing a more dynamic combat system, improving the graphics, and telling the most important story in our world.”

Dragon Age 2 thrusts players into the role of Hawke, a penniless refugee who rises to power to become the single most important character in the world of Dragon Age. Known to be a survivor of the Blight and the Champion of Kirkwall, the legend around Hawke’s rise to power is shrouded in myth and rumor. Featuring an all-new story spanning 10 years, players will help tell that tale by making tough moral choices, gathering the deadliest of allies, amassing fame and fortune, and sealing their place in history. The way you play will write the story of how the world is changed forever.

Dragon Age: Origins was released in late 2009, followed quickly by Awakenings, a standalone expansion pack, and a number of DLC packages shortly thereafter. So, I was not entirely surprised to see a new Dragon Age announced this quickly. 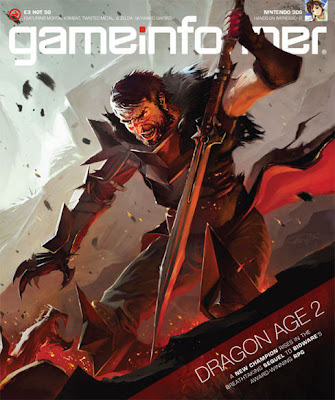 There appears to be some different art styles being thrown around, and the cover is no exception. The PR statement gives a good enough description for me.

Bioware is one of the biggest Western RPG developers out there, and in the last generation or two it is responsible for the creation of Star Wars: Knights of the Old Republic, Mass Effect, and Dragon Age properties.

SOURCE
Posted by ThirdRateMinion at 6:02 PM