Xbox Live Indie Games are a unique set. The myriad of titles can astound many gamers, much like the App Store. Continuing with that comparison, it is easy to split the game library into groups: from the small coming-of-age developer to professional software companies. Polywobble happens to sit in a unique group of its own: a game originally produced in 2002 upgraded to include geometrical educational aspects in 2010. 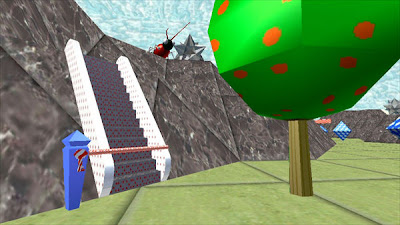 I don't think I learned about this in high school Geometry

Polywobble is a first-person adventure game, but this adventure is not the normal affair. Players are given the task to find five specific polyhedra three times a piece in each of the game’s four worlds. Along the way, players will need to dodge enemies and gather keys to unlock new paths to the polygons, adding a sense of exploration to the small worlds. Once these polyhedra have been hit three times, the player must find a way to where they have gathered, usually by finding a “launching pad” at the level’s end. At these gatherings, players must then attach name and polyhedron together ten times in a row. Toss in a collection of absurdly complex polyhedra at the end of each level, and that’s Polywobble as a whole.

The game’s four worlds consist of an ant-filled canyon, a dark cave covered with deadly, lurching flowers, a forest-surrounded mountain area, and a robot-infested city. These enemies are all invincible, and you are quite the opposite. A single collision with any threat will cause you to be thrown back to the starting point of the level, which can be frustrating after a while. Thankfully, the game provides you with tips which explain enemy patterns and the locations of keys; there is even an option to remove threats, if they become too much of a nuisance. The developer certainly assured that the game could be completed by anyone. 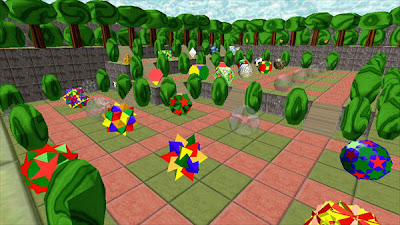 Not your ordinary garden
Other than the four main levels, there is the Poly Garden, where players can wander and examine each collected polyhedron in the game. More surprising than that, the game also provides three lectures on the polyhedra in the garden: five minutes for the Platonic Solids, five minutes for the Archimedean Solids, and three minutes highlighting some of the more complex polyhedra. Those tired of the main game can take part in one of three quizzes to name each of these three sets of shapes. Completing the quizzes unlock new modes in the Garden, but nothing extremely substantial. The third quiz does provide for a way for players to make a trophy using a polyhedra, but it will take some time before I get some of these names memorized. Even the creator is somewhat scared of it, himself! (Ed: We have since beaten the third quiz, and the trophy is neat, if you are willing to assemble it yourself.) 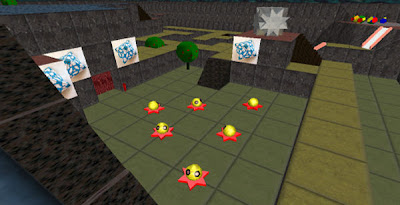 Not sure why the killflowers have polyhedra pictures on the walls...
Polywobble was originally developed on DarkBASIC under the name Plateau World, which is available for free at www.hufsoft.com/darkbasic/, and honestly, it still looks like a game made in DarkBASIC today. The graphics are very geometric, but this is to be expected, as the game’s main assets are polyhedral. The game does come off as a terribly lacking game, graphics wise, so players expecting anything close to resembling modern graphic models will be sorely disappointed. Furthermore, the game is a bit glitchy, too, as I found myself catching on objects, getting stuck to the walls, going through polygons, et cetera. It is polished enough to play through, but it is not a highly-produced title by any means.

The sound is very basic, too. Some of the levels have a hint of music at the basic midi level, whereas other levels are just looped sound effects. Hank’s lectures are a nice twist and add some liveliness to the game’s soundtrack, but the sound is too basic for many to even remember, let alone enjoy.

The game is a short one. After completing the four levels, you have the three quizzes and lectures, but even considering those, the game can be played in entirety within a two-hour span. You can replay the levels to get a faster time, but if you are not interested in polyhedra, you might find the game more boring than entertaining.

Those curious to try should not worry. Thankfully the trial is fairly robust. You can play the first level in its entirety and explore the remaining levels for a short while. That trial will certainly tell you whether or not the game is right for you. 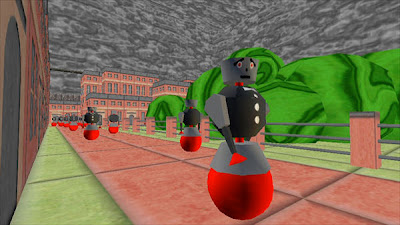 I will be honest: I like Polywobble, though that is probably my math nerd talking. Polywobble is a game I recommend to those interested in a simple adventure title with a focus on learning more about polyhedra. Those expecting extremely deep and game-dense experiences from this title might be less than interested. From a mathematic and learning perspective, it is a decent game. From a purely-gaming perspective, though, it is a short, uneven, and basic game.


Disclaimer: As with all Xbox Live Indie Games, this game is not rated by any official electronic entertainment board but is rated by peers before release and given specific ratings on sexual content, violence, and other mature content. Furthermore, all Xbox Live Indie games require an Internet connection to Xbox Live in order to play the games.

BACK TO REVIEWS PAGE

Posted by ThirdRateMinion at 10:41 PM