With the Wii’s IR pointer and Playstation 3’s Guncon 3 and Move controllers, Xbox 360 seems to have a hole in its lineup for arcade shooters. Thankfully, yyrgames has tried to fill this space with SharpShooter, a one-dollar xbox live title where shooting is fast, frentic, and zombie-free.

SharpShooter is comparable to old Arcade Shooters such as Point Blank. However, this game does not make use of any gun peripheral. In fact, it uses the dual-sticks of the Xbox 360 controller. The reticule is moved relative to the position of the stick; rather than pointing a direction to move the reticule, its position is relative to the position of the stick. This will take some time to learn, and even then, the controls make moving around the screen and aiming in a straight line hard to do. 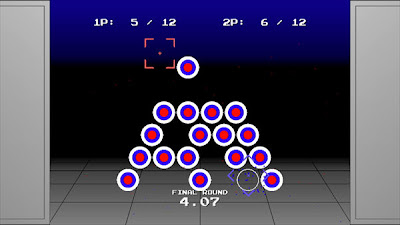 Four seconds to shoot at least six targets. Best get moving!
In SharpShooter, players go through one of twenty super-fast mini-games in which they must aim a reticule around the screen and shoot at targets moving in a short period of time. These events may require shooting at shrinking targets, shooting targets in numerical order, shooting a single target with a single bullet, or shooting a selection of targets to equal a fixed number. Once time is up, the score is collected, and the next event is selected. Repeat until the game is over.

A game of SharpShooter varies in length between one difficulty and the next, and there are a lot of them! The game has five different difficulties; the higher the difficulty level, the more mini-games you have to play. Not only that, but the game allows players to select between the left and the right side of the screen, or both at the same time for more ambidextrous shooters. This gives a lot of modes for players to choose from and adds to the game’s variety.

On top of the single player experience, SharpShooter provides a versus mode, adding a layer of multiplayer to the arcade shooting experience, even if the actual mode is thin in comparison to the main game experience. To top the experience off, players can go into the Extra mode and enjoy the benefits of a controller massage, the best of Xbox Live Indie Games, right? For a single dollar, there is certainly enough content to choose from. 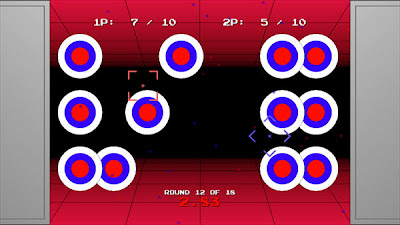 Even the simplest of challenges become extremely difficult later on!
Of course, content amount is nothing if the content itself is not fun. From a presentation standpoint, the game is basic, maybe too basic. The graphics are not something to consider when playing this game; compared to the likes of more professional arcade shooters, this game is like a freeware title on Flash. The majority of the game takes place shooting at basic targets, which can be annoying, as the game does not provide more points for Bull’s-eyes. However, despite these drawbacks, the presentation is very consistent throughout. Music does add to the frantic nature of the game itself, and for how short the games are, the music is surprisingly catchy, if not a little simplistic. If techno beats are not you’re thing, you probably won’t find the game audibly pleasing. 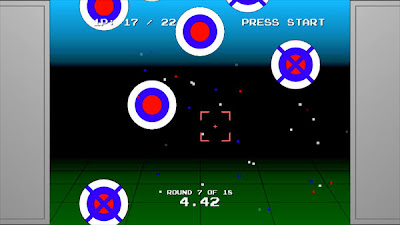 It seems this player's shooting is right on target.
Despite the basic visual content, the game is fun. It provides the basic gameplay of an arcade shooter, and once controls are learned, players should find themselves shooting at targets rapidly. Unfortunately, the controls might never be as second nature for some as others. Between the leaderboards and the quick pick-up-and-play mentality the game bestows, it is hard to put down when you start. When I traversed into the higher difficulties, however, the game got occasionally frustrating, especially when mental math was necessary. Thankfully, the game seems to take more pride in getting scores over actually winning, like a true arcade shooter.

SharpShooter helps fill a hole left open for the Xbox 360, but it does not fill it without fault. The game provides many difficulties, multiple modes in those difficulties, and even a competent multiplayer mode. It even provides a massage mode to sweeten the deal. The usage of leaderboards without Xbox Live is interesting, but the lack of lasting offline leaderboards leaves me confused. Controls are very loose at first, but the game is extremely competent once control is mastered. Of course, that is if you are capable of mastering them.

Lots of modes and content for one dollar. If you can look past the simplistic design and initial control wall, the game is definitely worthy of a purchase.

Disclaimer: As with all Xbox Live Indie Games, this game is not rated by any official electronic entertainment board but is rated by peers before release and given specific ratings on sexual content, violence, and other mature content. Furthermore, all Xbox Live Indie games require an Internet connection to Xbox Live in order to play the games.
Posted by ThirdRateMinion at 2:37 PM