In Nintendo's Fall Conference in Japan, the company finally outlaid the release date, pricing, and other details regarding its newest handheld, the Nintendo 3DS.


The Japanese launch for the Nintendo 3DS is set for February 26th, 2011, and US and Europe will see their launch of the 3DS in March. The price for the Japanese 3DS will be 2500 yen, which is the equivalent of $300 in the US. Pricing for the other locations are unknown, but $250 seems to be an adequate prediction. 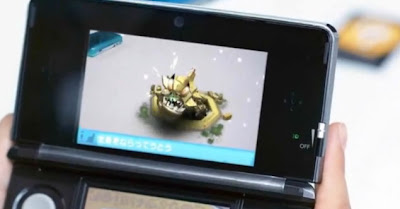 At launch, the 3DS will have two colors: Aqua Blue and Cosmos Black. Each 3DS will include a 2 GB SD card for storage beyond the internal harddrive space, and each will have a charging dock for the handheld to use. Furthermore, the handheld comes with six cards which can produce augmented reality objects for the 3DS's "AR Games" application, including a dragon monster and a moving target.

Those with 3DS can create Mii's using the Mii Studio. By taking a picture of someone, the application can develop a Mii of that person on the fly. Also using the cameras in the "Nintendo 3DS Cameras" application, people can take 3D pictures or even merge two faces together. Other applications in the 3DS OS include "Nintendo 3DS Sound" and "Book."

Nintendo outlined one particularly unique aspect of the 3DS: the handheld is constantly in Tag Mode, known as StreetPass. As people travel around with the 3DS, data from other 3DS systems automatically trade between each other, sending data of Miis and information from games they have played to other 3DSs. In "StrettPass Mii Plaza," players can see all of the Miis collected from other 3DSs. An example of game data being used would be in Super Street Fighter IV 3D Edition; when two players pass, random trophies earned in each other's games battle and result in added scores and data once the game is played again by each player. Furthermore, the 3DS will download updates wirelessly, even when the system is off, sort of like WiiConnect24. Nintendo calls this SpotPass for 3DS.

More data about the 3DS launch in the US will arrive soon, but it seems most everything has been unveiled for the system's main applications already.

Posted by ThirdRateMinion at 12:21 AM