Presenting Wacky Wednesday, a weekly article in which 3RM brings out the weird, the wacky, the whimsical, the wild, the wildebeest...wait. No, not that. We here at Third Rate Minion take the time to help spread the oddities of the Internet, whether they are extremely unique Rom Hacks, independent games, odd gaming-related videos, or any other intriguing media for the 3RM audience.

Since Metroid: Other M came out this week, I figured it would be nice to look at a particularly interesting game developed in the Metroid universe by a fan. Whereas Metroid: Other M is a story-driven title with a longer completion time than most previous games in the series, Minitroid promises to bring a much more condensed and story-free game into the mix. 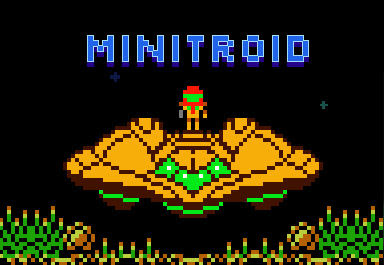 The game is developed by Tokinsom of Metroid Fan Mission, a website dedicated to Metroid Fan Games. He is also known for developing the title Metroid +H, a super-deformed Metroid title that is currently shelved. In light of that project being shelved, he has been working on a shorter, simpler game experience.

When he originally announced the project, he cited:

So here's a little game I've spent a few days on practicing a new RAD program. There's not much to look at right now..just seeing if anyone thinks it would be interesting to play.. It's essentially a Metroid II minigame. At first I was thinking you do nothing but hunt various Metroid larvae which have infested the planet, but that could get boring after a while so I added a hornoad and plan to add other enemies..but then ya got a real mini Metroid II..hm. anyway..

Now over a month later, the game's small, pixelart title seems to be shaping up quite well. There are a number of enemies to fight and Metroids to kill. It really looks like a Mini Metroid II in a way. Certainly worth a look at the gameplay.

Hopefully this one makes it out of the woodworks!